You are here: Greenwich / Blogs / Rob Powell / The Grave of John Flamsteed

This is the story of how the grave of John Flamsteed - the first scientist appointed as the Royal Astronomer - went unmarked after his death for the best part of two centuries.

The name of John Flamsteed is a familiar one around Greenwich. He was the first Astronomer Royal and he himself laid the foundation stone for the new Royal Observatory which was built by Royal Warrant as a base for astronomical studies.

Flamsteed House (pictured below), as it's now known, was designed by Sir Christopher Wren and is the original Observatory building which also housed the astronomers' apartments. 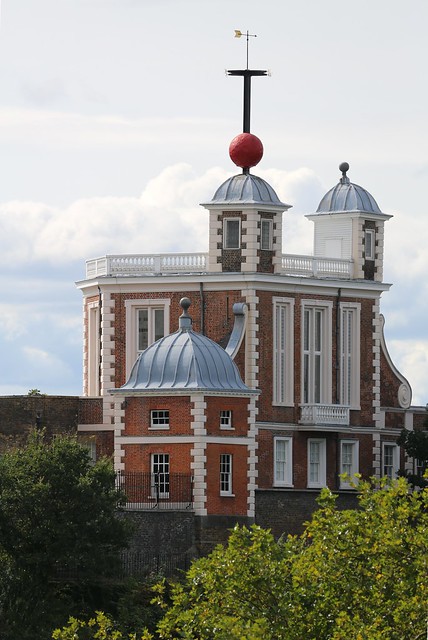 There's a Flamsteed Road in Charlton and there's the Flamsteed Astronomy Society based at the Observatory. There's even a crater named after him on the moon.

Flamsteed was appointed as the first Astronomer Royal in 1675, a post he retained until his death in 1719. But it wasn't long after that appointment that he was ordained and in 1684 he moved out of the Observatory and became the Rector of Burstow.

Burstow is a small village in Surrey just east of Gatwick Airport where today planes roar overhead at about 1200ft on their approach to the runway just a short distance away. 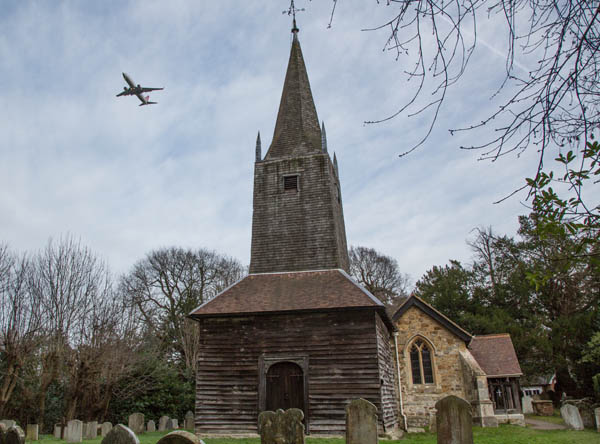 Visitors to the church where he is buried will today see several tributes to its famous rector but this hasn't always been the case. In fact, during the 19th century - long after his death - it became a talking point as to why there existed no memorial to Flamsteed at the church and it wasn't even known exactly whether he was buried in the church yard or in the chancel.

An article in Gentleman's Magazine, 1866, profiled Flamsteed and dwelled upon this very point.

"And what of Flamsteed? Where is his resting place and his monument? Must we say that former is scarcely known, and that nothing in shape of the latter exists... Thinking it's most probable that they were interred in the churchyard of the parish of his ministry, we lately visited  Burstow, with the hope of finding some tombstone or monument in his memory. We found none. The present rector kindly informed us that there is an entry in the parish register to the effect John Flamsteed was buried on January 12, 1720, and a tradition exists that he was laid beneath the chancel of the church... but that no monument or tablet has ever existed; not even is his name inscribed upon the stone that covers his bones. Neglected in life, he has been forgotten in death."

While it may have been the tradition that the rector be laid beneath the chancel, there was no definitive evidence that this was where Flamsteed was.

Twenty-two years later, in 1888 - almost 170 years after Flamsteed's death - the missing memorial for the first Astronomer Royal was revisited by Cornishman Edwin Dunkin, himself an astronomer and former President of the Royal Astronomical Society.

Dunkin, born in Truro, spent his career working at the Greenwich Observatory before retiring in 1884. He lived in a house in Blackheath he'd named Kenwyn (which is at 27 Kidbrooke Park Road - thanks Neil Rhind). He took up the lack of a memorial for Flamsteed in the pages of the monthly periodical for all things astronomical called The Observatory.

Having obtained the will of Flamsteed's widow, Margaret, Dunkin was able to say, for the first time with certainty, that Flamsteed was indeed buried under the chancel as she had left instructions for her own remains to be deposited "in the same Grave in which Mr John Flamsteed is buryed in the Chancell of Burstow Church."

Intriguingly, she also left instructions, and twenty five pounds, for the executor of her will to place "in the aforesaid Chancell of Burstow... A Marble stone or Monument, with an inscription in Latin, in memory of the late Reverend Mr. John Flamsteed."

So where was the monument for which instruction and money had been left by Margaret Flamsteed?

"Why the executor, Mr John Hodgson, failed to carry out the expressed wishes of Mrs Flamsteed must be left as a matter of conjecture," writes Dunkin

"It is clear that the monument was never erected, as it would be extremely improbable that one of the nature of that described in the world would have totally disappeared from the chancel... We can come to no other conclusion than that the executor, who was the residuary  legatee, either wilfully or carelessly neglected his duty."

Having made the breakthrough of confirming exactly where Flamsteed was buried, Dunkin was then a key figure in the erection of a monument.

Along with two others, Dunkin was appointed at an 1893 meeting of the Royal Astronomical Society to a special committee, tasked with putting in place a fitting memorial to Flamsteed.

Those present at the meeting were quick to make clear their view that a window at Burstow Church - which had been recently suggested - would not be the right way for the newly formed Flamsteed Memorial Committee to proceed.

The President commented, "to put a window into a church is hardly a sufficient recognition of Flamsteed's memory, on which we desire to insist."

Arthur Cowper Raynard added, "I wish to make sure that it will not be a window."

A motion was then passed offering guidance on what form the memorial should take:

"This meeting strongly urges on the committee the desirability of the memorial taking the form of a medallion or bust of Flamsteed, with an inscription in English."

And so, where once visitors to Burstow saw no memorial or marker at all for country's first Astronomer Royal, they now see this wall memorial which perfectly matches the stated intention of the Royal Astronomical Society. 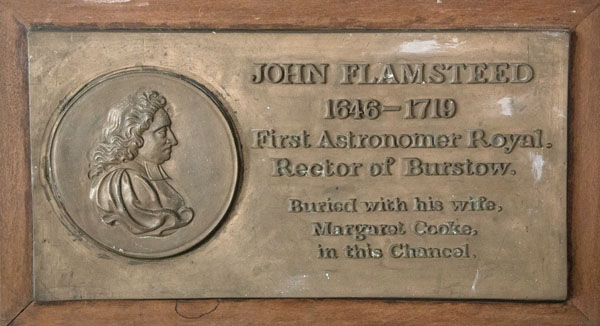 There is also now a plaque at the back of the chancel. 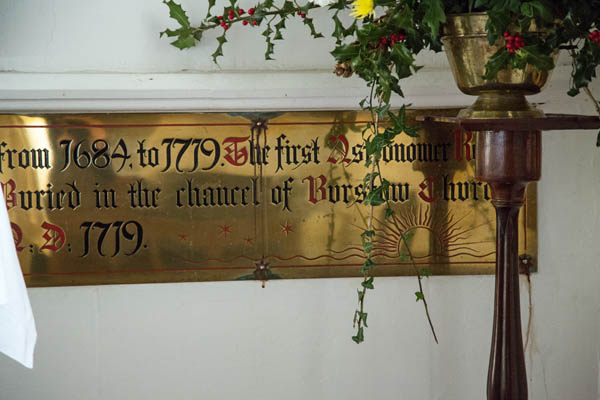 A large framed poster at the other end of the church tells the story of Flamsteed's life. 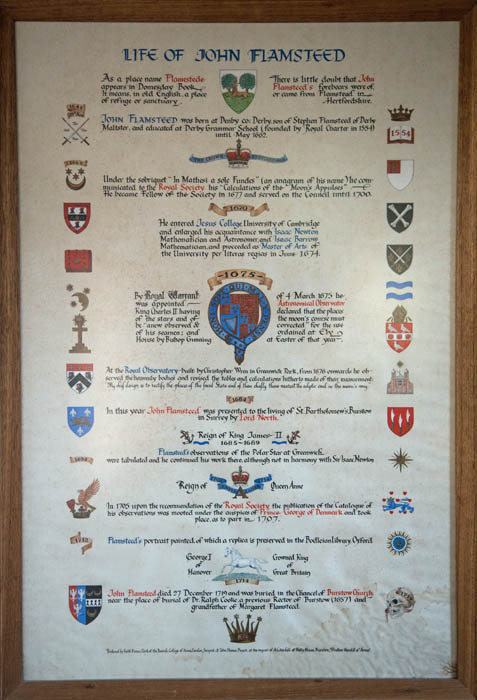 The name of Flamsteed is also remembered at the Church Hall. 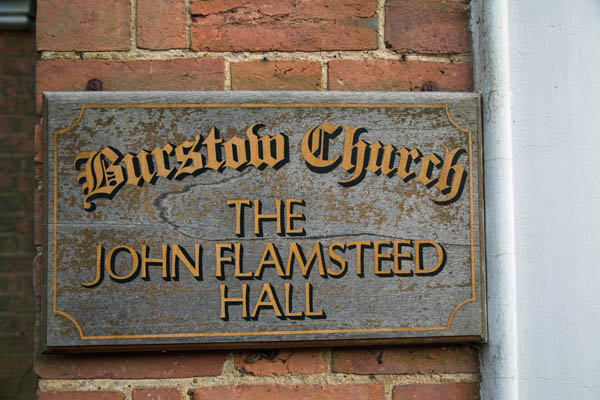 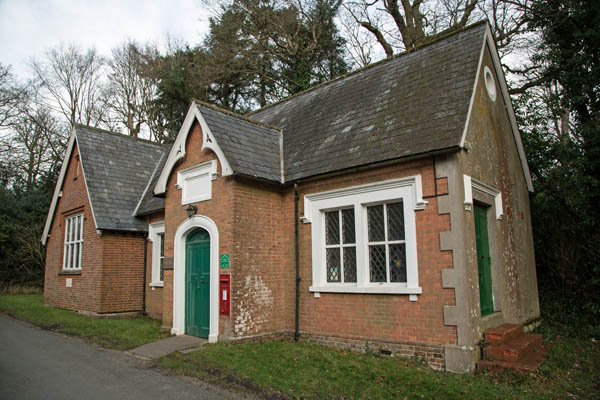 And this is the chancel under which the mortal remains of John Flamsteed and his widow Margaret, who was herself the granddaughter of another rector of Burstow, now rest in peace. 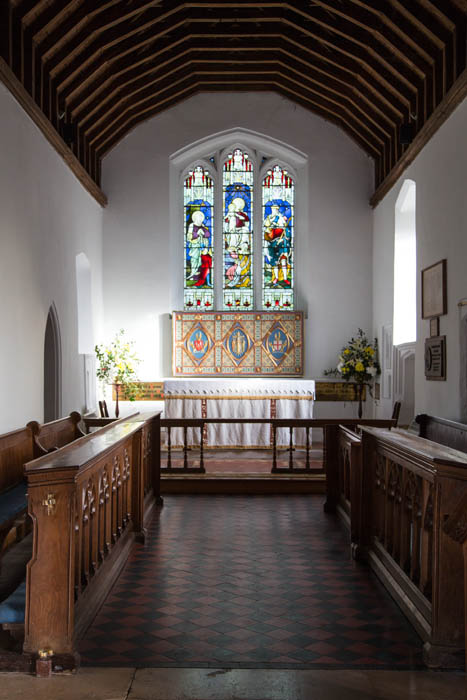 A foot note, perhaps, on the astronomer Edwin Dunkin who may be considered by some as the hero of this tale for helping to properly locate the grave of Flamsteed and then serving on the special committee which put in place the memorial. What became of him? Dunkin died at his home, Kenwyn, in November 1898 and is buried at Charlton Cemetery. 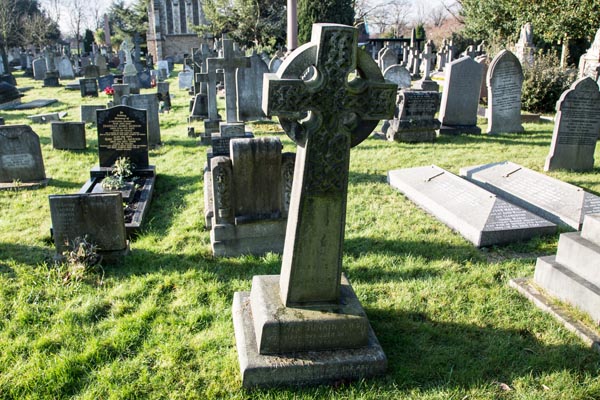 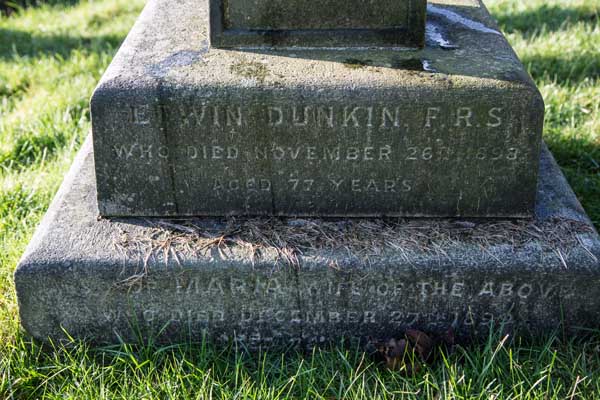