You are here: Greenwich / Magazine / The Greenwich.co.uk guide to… 234 Trafalgar Road

Greenwich.co.uk recently reported that a London church was eyeing up the former restaurant in the Plaza building on Trafalgar Road. If a church was to be established in the former cinema building, it would mark a seventy-five year transformation from Our Gracie to His Grace - this is the story of 234 Trafalgar Road...

"Built for Mr and Mrs Greenwich" 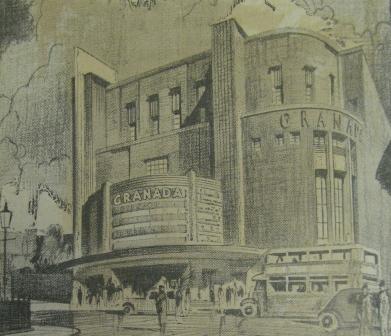 Illustration of the proposed Granada Theatre printed by the Kentish Mercury

The Granada Theatre company was experiencing incredible growth in the 1930s across London and the south east under the stewardship of the impresario, Sidney Bernstein. Their cinemas promised customers "service with a smile" and reminded them in advertising that it should be pronounced "gra-NAH-dah". In 1937, the chain arrived in Greenwich.

The new theatre at the busy junction of Trafalgar Road, Blackwall Lane, Woolwich Road and Vanbrugh Hill took seven months to build.  Able to seat over 1900 patrons, it was designed by C. Howard Crane, with the interior designed by Theodore Komisarjevsky.

A feature in the Kentish Mercury a week before it opened it declared the new addition to the Granada chain,  "Built for Mr and Mrs Greenwich".

The newspaper noted that the "predominant colour in the scheme of wall decoration is silver, set off by natural and pastel shades in various hues."

"Behind the facade is a large area with a flat surface, where, presumably, the staff will be able to sunbathe and indulge in other forms of recreation."

Inside the Granada was a Mighty Wurlitzer organ, able to "command a world of music, from a full symphony orchestra to a Chinese tom-tom, the human voice, ships' syrens, the roar of an aeroplane, the crash of the surf, even a telephone bell."

The theatre was managed at its opening by John Roberts, who had six years' of experience in running the Rialto in Leytonstone.

It was, according to the Cinema Treasures website, the "plainest of the purpose built Granada Theatre chain." It certainly lacked the glamour of the Woolwich Granada which had opened a few months earlier and had been billed as "the most romantic theatre ever built" - later recognised with a Grade II listing.

Greenwich's Granada was opened on Wednesday 29th September 1937 by the superstar, Gracie Fields.

'Gracie "mobbed" at Greenwich' was the headline in the Kentish Independent, as they reported on the presence of "Britain's most popular comedienne". Actually Fields was a late stand in, and it was Maureen O'Sullivan who had been due to open the Granada but she had to withdraw because she was suffering from flu.

The presence of 'Our Gracie' drew a crowd - estimates vary between 8,000 and 10,000 - to the theatre's opening night. Upon arriving, Gracie went straight up to a roof balcony and performed "Sing as we go" and "Sally" for the fans out in Trafalgar Road. Photos from the opening made the next day's Daily Mirror.

According to the Kentish Mercury, she was piped on to the stage by the Dagenham Girl Pipers. The report says:

"She described the cinema as 'proper posh' and then said in a rich Lancashire accent, 'Well, I don't suppose you want to hear me talking, you want to hear me sing. Shove a piano on the stage, lads!' And she sang 'Sing As We Go', 'I Never Cried So Much in All My Life' and 'Sally'"

Charlton Athletic footballers Donald Welsh and John Oakes presented a signed football on stage to a pupil from John Roan School as a reward for being the first to enrol in the "granadiers" - a kids club which gave members special deals on Saturday matinees.

Elephant Boy and Midnight Taxi were the films shown on that opening night.

The opening night of the Granada coincided with a meeting of the council, so Mayor Dabin couldn't accept his invitation to attend the opening. He, and others from the council, instead visited the Granada on the following Monday.

Mayor Dabin declared it to be the "the last word in cinemas" and said he hoped it would be "an incentive to the traders in Trafalgar Road and to the landlords of the properties to improve their buildings".

Soon after opening, an amateur talent contest was launched on Friday nights at the Greenwich Granada.

A prize of £2 was on offer for the winner and £1 for the second placed act - whichever act got the loudest applause from the audience was crowned the winner.

The first such contest took place on October 15th. Eight entrants from Greenwich, Deptford, Plumstead and as far as Chatham took to the stage to compete for the first prize. The Claire Bros, who played the accordion, took the spoils and Ted Maitland from Alliance Road, Plumstead, came second for his recital of "The Charge Of The Light Brigade".

A few months later, Ted Scoging of Whitworth Street proved so popular with his syncopated piano routine that as well as winning the prize, he was offered a week's engagement to perform at the Granada.

The Granada, like all cinemas, would advertise its listings in the local papers. Flyers were also created and handed out - often with a topical twist using newspaper cuttings.

This handbill below subverted a local newspaper report of the proposed second Blackwall Tunnel to suggest it was needed to "carry the crowds" to see Arthur Tracy appear in The Street Singer. 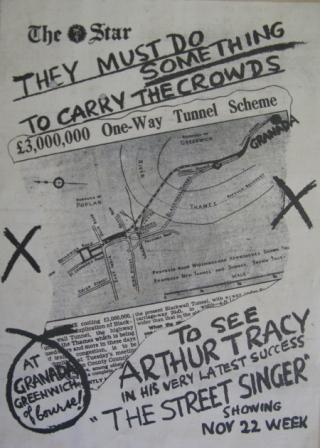 From the Granada archive at the British Film Institute library

When newspapers reported on the strange case of noted theatre organist, Reginald Dixon, getting lost - and reported missing for a while - in a thick fog in Middlesex, the Greenwich Granada rushed out flyers exclaiming, "We've found him and even if it snows he will appear at Greenwich Granada."

Memories of the Granada

Joan Collins was a child living in Tyler Street at the time of the opening of the Granada. She recalls the first night:

"It was dark. The whole Granada building was dark and I was sitting on my father's shoulder... all of a sudden, all of the outside lights went on. Everybody cheered and screamed and clapped... and then Gracie Fields came and sang some of her popular songs. It was very special."

Listen to Joan's memories of the opening night of the Granada

During the second World War, George Farnish was an assistant to the Gas Identification Officer in Greenwich. In an account of his life in he wrote before he died, he recalls having to carry out a mock gas attack on a Saturday afternoon in the town.

He placed a cannister of weak tear gas at the corner the junction by the Granada and warned shops to shut their doors and the theatre to control its fans.

"The police had to blow their whistles and shout 'gas', then suddenly the Granada started emptying out, people with tear gas in their eyes. The manager had not believed us and left the inlet air fans on, and the place had filled very quickly. "

In his memoirs, Greenwich-born author Christopher Fowler remembers the Granada as a place where "hunchbacked, chain-smoking pensioners whiled away their afternoons because they got cheap tickets to the early shows. When they weren't noisily unwrapping boiled sweets in the quiet parts of the film, they were creeping around the toilets with bladder complaints."

After the amazing boom of cinemas throughout the 30s came the inevitable decline. UK wide cinema admissions peaked in 1946 and had been on a downward trend ever since, dipping below one million in 1957 and continuing to fall rapidly as home television experienced a boom of its own.

The entrepreneurial Granada was looking for ways to diversify and started to introduce bingo at some of its less successful theatres. Part week bingo was introduced in Greenwich in 1963 and within five years, films had been dropped altogether.

The Granada survived as a bingo hall through to the 80s. The pictures below show that the sign which would have once advertised the features simply said, "Bingo Everyday". 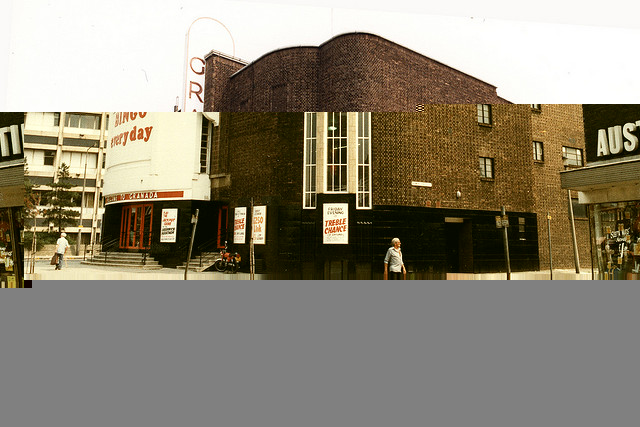 By the end of the 80s the bingo hall had been closed down and Granada's time in Greenwich had come to an end.

A Star Is Born

In autumn of 1992, 234 Trafalgar Road was reborn as the Stars nightclub and is still fondly remembered by almost 400 people who have joined a Facebook group in its honour.

One former patron commented on the group, "Oh those were the days ..... crispy scruched hair ..knee boots ..and orange foundation..Dj playing the same songs in the same order every Friday.. I LOVED IT!!!!"

Another fan of the club added, "I remember my mate jumping off a raised stage at a foam party, landing on his knees and nearly breaking his legs! Priceless memories!"

For others though, the club was a place to avoid - it earned itself the unfortunate nick name, "Stabs", with one local resident remembering that there was "always too much blood on the road outside Stars on a Saturday morning for me to ever venture in."

Following the closure of Stars, developers moved in.

The building was gutted and thirty-nine new apartments were built inside.  The building was rebranded as the Plaza and shops were created at the ground level with Ladbrokes the bookmakers occupying the prime retail space facing onto Trafalgar Road.

Local journalist Darryl Chamberlain took these photos at the time of the transformation. 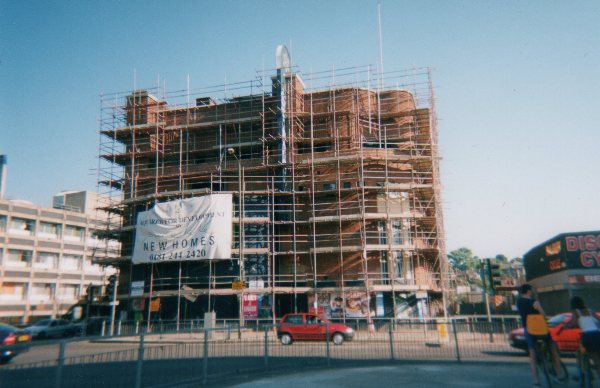 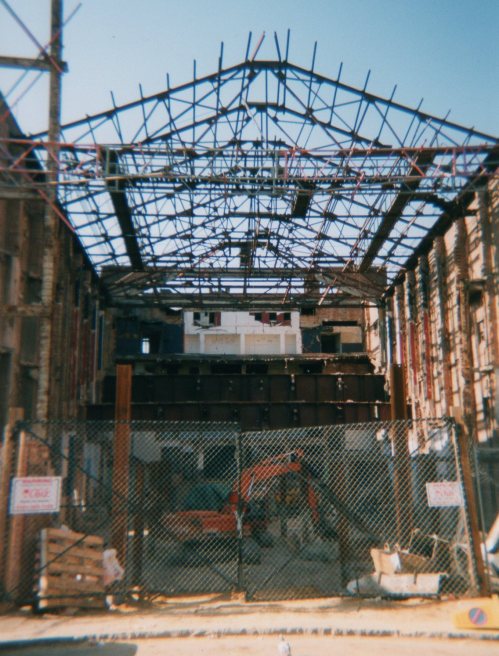 In 2006,  Caffreys Sports Bar requested permission from Greenwich Council to be able to offer pole dancing from its premises in the Plaza building.

The proposal proved to be hugely controversial and a campaign was launched by local residents to oppose the plan.

The Council's Licensing Committee did, however, grant permission for dancing to go ahead - but, to the relief of local campaigners, a Stop Notice was issued by the Council at the last minute to stop the bar from trading.

That Stop Notice was successfully appealed by the owner, Shopsearch UK Limited, and in 2009 the council was to compensate the owner for lost income.

A chinese restaurant opened for a while above the bookmakers but the space is now empty and various planning applications for changes of use have been submitted to the council, including for use as a place of education, a three bedroom apartment and most recently as a place of worship.

Sidney Bernstein himself did not get attached to bricks and mortar. In fact, he strongly resisted his Tooting and Woolwich theatres being listed and while the Greenwich Granada may not boast their splendour, its eventful history and unmissable presence at one of Greenwich's busiest junctions makes it part of the fabric of East Greenwich. With thanks to the the Greenwich Heritage Centre, the British Film Institute library, Joan Collins, Darryl Chamberlain and Dr Mary Mills.