You are here: Greenwich / Magazine / A Tribute To Greenwich Village Market 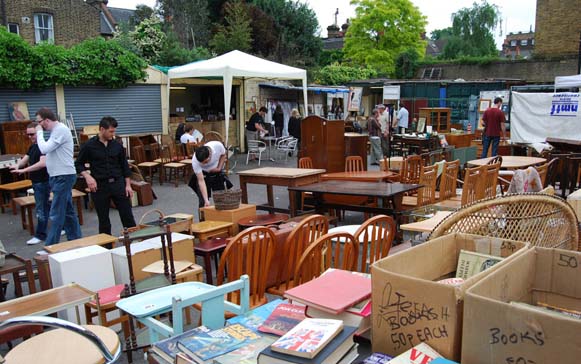 Greenwich Village Market closes this weekend. Author of the London Market Guide, Andrew Kershman, explains why the closure of the market is such a loss to Greenwich.

For a while in the early 90s Greenwich occupied a unique place in London's market scene and seemed destined to rival Portobello and Camden. At that time there were five different markets taking place in Greenwich at the weekend including a small crafts market called Bosun's Yard and a Flea Market on Thames Street, where traders sold junk from rusting ship containers.

When I returned from college to London with a car full of books and little money, I started selling my library at the market and saw the place in its prime. Since those halcyon days the Flea Market and Bosun’s Yard have closed and another Greenwich Market is soon to join them.

The covered market, in the central part of Greenwich, has become more dominant in recent years with its mix of arts, crafts and food and tends be the first port of call for tourists. Likewise, the Antiques Market, next to the cinema on Greenwich High Street, is still soldiering on at the weekends, but is small and without any roof it is vulnerable to the British weather. My favourite has always been the sprawling complex of shops, lock-ups and stalls just off Stockwell Street, opposite the Ibis Hotel, called The Village Market. It was here that I sold my second-hand books, bought some great furniture and acquired a wardrobe of retro clothing from the many second-hand stalls. It is this major Greenwich market that is due to close on Sunday 22nd March, marking the decline in the area’s status as a unique and interesting shopping area.

The best thing about the Village Market was that space was allowed for traders to sell large items like second-hand furniture and there was room for storage at the end of trading. This kind of spacious market with lots of cheap second-hand things has beeb disappearing as land values have increased and developers moved in. Famous markets such as Bell Street have closed, while the Stables Market in Camden has been transformed into a smart alternative shopping area, rather than the junk market it started as in the 1970s.

I now write The London Market Guide. Researching each edition of the book has allowed me to chronicle the rise and fall of many of London’s markets. When I returned in the summer of 2008 I was saddened to see the decline in the Greenwich Village Market. It still retained some of its charm, but the owners were planning to replace the market with another dull shops and residential development and the place had a neglected feel. Having wandered around the clothing stalls and noticed that the indoor collectables part of the market was actually a lot better than it used to be, it was clear that the place still had the potential to be a great market. I got involved in a campaign to save the Village Market in the hope that some more reasonable plans could be devised that took account of Greenwich as a great market area. 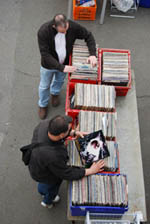 In the course of campaigning I was struck how many people were genuinely fond of the market and upset to hear of its imminent closure. The attempts at public consultation had been pretty limited with a display on the top floor of a municipal building and the planning documents lodged at the local library. It seemed that lots of people regretted the market’s closure but not enough to spend too much time campaigning for its survival.

I attended the planning committee meeting on 26th June 2008 when the council approved the planning application, having rejected a very similar proposal the year before. The councilors showed very little interest in the market and spent as much time discussing the exterior rendering of the new shops and residential units. The developers had cleverly allocated space for eleven stalls on the outside of the complex and this seemed to satisfy the council that a 'market' of some sort was continuing on the site. The fact that just a few stalls would be a shadow of the great market of the 1990's didn’t seem to matter.

Since then the onset of the credit crunch has led to the developers shelving their plans for the site, but this has not given the Village Market any reprieve and on Sunday 22nd March it will close its gates for the last time.

As with many things in life you either get it or you don't. You either think that junk and second-hand markets are great or that they are dirty events that are only tolerable until the space they use is built upon. Even if the developers and the council don’t understand, this closure is a big deal for Greenwich, particularly when the closure of the Central Market is also under consideration. If things continue in this way, Greenwich will soon have just one small market left. Maritime history is all well and good, but without its markets Greenwich will loose many of its younger visitors and its unique place in London's shopping landscape.

What are your memories of Greenwich Village Market? Post your comments below...