Our continuing series of profiles of candidates for the Peninsula and Greenwich West wards in the forthcoming council elections. 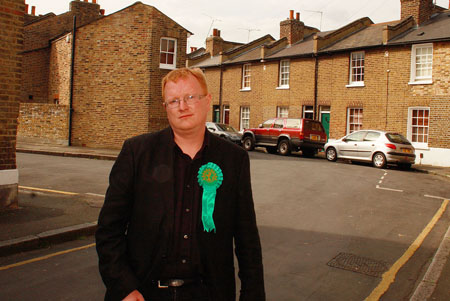 I've lived in the east Greenwich and Charlton area all my life - I was brought up in Combedale Road, and now live in Charlton. I'm a journalist who worked on the BBC News website until last year, and since then I've been doing freelance work (including for greenwich.co.uk). I'm a season ticket holder at The Valley and like live music, long walks and even longer train journeys. I also write the 853 blog.

Council elections matter at least as much as the general election - I'd even say you've more chance of forcing change through by voting in a council election than in a general election. If your local council isn't sweeping your street properly, is leaving your local facilities to rot away, allows developers to walk all over it and has no plans to tackle congestion and pollution, then you should make a stand and vote.

I've kept blogs for seven years and started off being rude about everyone and everything under a psuedonym. But as time went on, the penny dropped and I realised that taking potshots at everything wasn't enough, and through blogging I'd met people in Lewisham who were doing good things to improve their areas. When I quit my job at the BBC I decided I wanted to do something positive to improve the area. I'd been impressed with what Greens had done in Lewisham, especially in doing basic things like keeping residents updated with what they're doing - something that seems beyond most Greenwich councillors. So I joined the Greens to help them improve their publicity, and when the opportunity to stand came up, I jumped at it. This area's my home, and I want to make it better.

It's the walk along the river - we've miles of waterfront that we don't talk up enough, from the tourist scene in central Greenwich through to the industry in Charlton. The recent fiasco with the Thames Path closure highlights just how it gets taken for granted. It's as important to Greenwich as the park is. One of the good things about the recent developments is that - eventually - the walk was opened right the way around the peninsula for the first time. We need to keep up the pressure to make sure the path is kept open as much as possible, and stays open.

We're also lucky to have beautiful streets around Pelton Road - which could benefit from a little bit more care - some cracking pubs and the buzz around The Valley on matchdays.

If elected, what would be your priorities for the Peninsula ward over the next four years?

We need to make sure local services are defended - East Greenwich law centre is under threat of closure, and the council won't commit to the
future of East Greenwich Library, which is a fantastic community facility in a beautiful building which should stay in public use. Greenwich Council should also come clean about just what's happening on the old hospital site - this patronising "heart of East Greenwich" stuff is wearing thin when the land's been lying empty for three years.

We'd also like to pursue some simple ideas to combat congestion, like electronic boards to warn drivers of traffic jams through Greenwich or Blackwall Tunnel closures, and put pressure on TfL and Southeastern to make public transport more attractive to use.

We need to make sure streets are kept clean and safe - parts of the ward, particularly in Charlton, barely see a street sweeper's broom and are left looking an absolute state after the bins are collected.

We'd like to champion local businesses - the East Greenwich Traders Association is doing great work and we'd like to help them do better. And I'd like to see the barriers between the Millennium Village and the rest of the area broken down - it could be a real asset to the area, but GMV residents have issues with the way it's run. It's incredible that nobody has been able to set up a full-time cafe by the ecology park, for example - it could boost its profile like the cafe
in East Greenwich Pleasance has done there, and attract other businesses to GMV.

Finally - the Greens will keep publishing newsletters and keep in touch with residents. Councillors on their own can't improve Greenwich, but by teaming up with local people, then together we can give it our best shot.