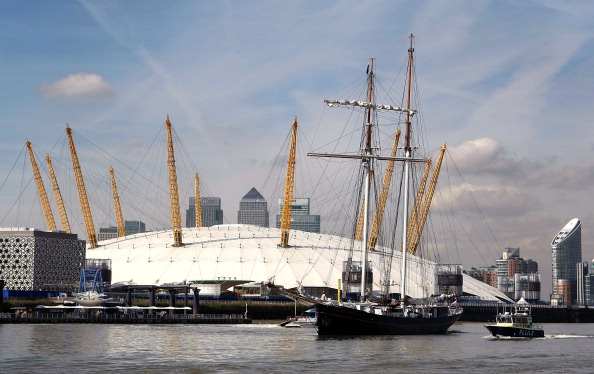 A SPECTACULAR flotilla of tall ships will arrive in Greenwich next year as part of Sail Royal Greenwich.

The Dutch organisers unveiled their plans to paint the town orange yesterday at a press launch on board De Wylde Swan - the world's largest two mast topsail schooner.

As the tall ship set off from North Greenwich Pier, the team behind  Sail Royal Greenwich - who were also involved in the staging of SAIL Amsterdam - put forward their vision for next summer, describing it as a chance to "get in touch with the Dutch."

Sail Royal Greenwich will bring 18 tall ships to the River Thames during July and August to coincide with London 2012. The ships will be moored at Woolwich for the duration of the Games and each carry out two sailings per day to Tower Bridge and back.

Those on board, groups between 20-140 and expected to mainly be corporate clients, will enjoy menus designed by Michelin star chef Richard Corrigan.

The showpiece event comes on July 25th when the tall ships will be joined by private yacht owners for what promises to be a stunning parade up the Thames. Views from aboard de Wylde Swan

But the orange invasion does not end there: fellow Dutch firm, OranjeCamping, is planning an up-market camp site on the Greenwich Peninsula.

Following their excursion on to the Thames, the assembled media were taken to a piece of land which will form half of the OranjeCamp - Meantime Nursery, off West Parkside.

Described just six months ago as being a "unique new nature site", the former industrial site will instead provide "glamourous" temporary accommodation for sport fans next summer.

OranjeCamping made its name with luxury temporary accommodation for fans of the Dutch football team and last summer they travelled around South Africa for the World Cup in their distinctive orange double decker bus.

Accommodating approximately 4000 sport fans, the camp will offer various levels of accommodation ranging from those bringing their own tents through to luxury VIP safari style tents at the high end, equipped with bed, wardrobes, wireless internet and "mood lighting".

The guests in the campsite will predominately be from the Netherlands and are expected to include many who are Olympic ticket holders.

"The Oranjecamping offers more than just accommodation; it will be a true orange experience right in the heart of the Games in a world renowned ‘orange atmosphere’. We expect about 4000 guests per day and we offer a daily entertainment programme." A failed licensing application for the site just a day earlier did little to dampen the organisers' spirits as de Wit exchanged flags with Greenwich Council's cabinet member for Culture and the Olympics, John Fahy (both pictured above). 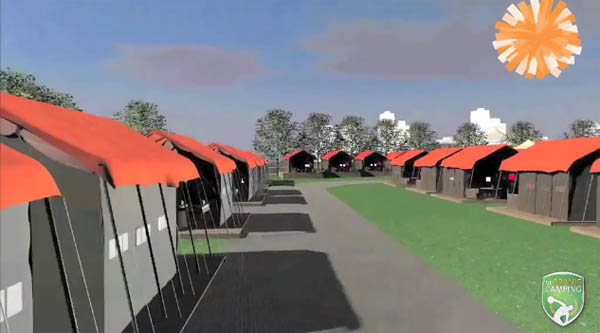 Illustration of the camping area from Oranjecamping promotional video 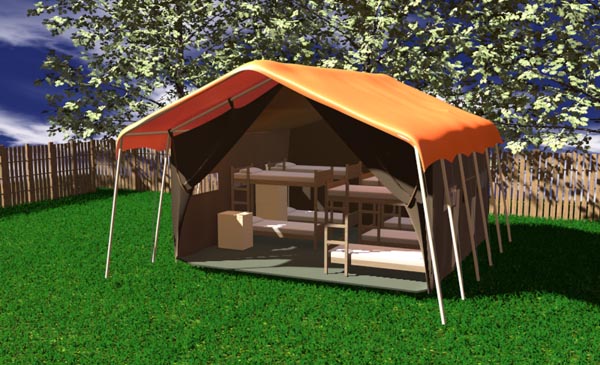 Illustration of one of the high end Oranjecamping tents