Proposals to split Greenwich between two different constituencies have received the backing of local Conservatives.

The plan to divide the town between two new constituencies forms part of the Boundary Commission's review, which was initiated by the Government to reduce the number of MPs and make constituencies more uniform in size.

"Greenwich Conservatives would strongly encourage residents to support the Boundary Commission’s proposals which seem to us to strike the right balance and give poorer communities a stronger voice."

Current MP, Nick Raynsford, has opposed the plans, calling them "nonsense" in an article for this website and speaking out against them at last month's public hearings held at Lewisham Town Hall.

Labour's alternative plan would see the existing Greenwich and Woolwich constituency retained, with the addition of the rest of Blackheath and also the Kidbrooke and Hornfair ward.

The closing date to comment on the Boundary Commission's proposals is December 5th. 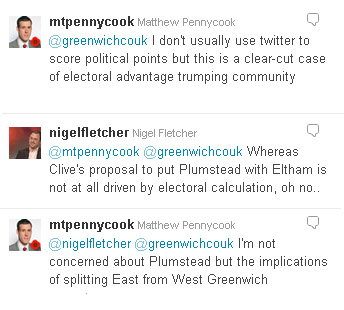