Work was required on the gate to allow large vehicles through for the staging of London 2012, and park bosses say they are using this as an opportunity to carry out "improvements" that have been "needed for some time".

The new configuration of the gate will be set back within the park by almost four metres, which Royal Parks say will make it easier for lorries to turn at the roundabout in front of the entrance and also make it safer for cyclists exiting the park.

Brick piers that formed part of the gate have been demolished but Royal Parks say only one of them retained its original bricks - dating back to 1885 - and they will be kept for use on future repairs to St Mary's Gate. Royal Parks also say that all of the original Portland stone cornice and plinths are being salvaged, repaired and reused.

"The work we are undertaking will make improvements to the layout of the junction and have been needed for some time, and although some disruption will be caused the end result will mean improvements for all users of the park. The current gates date from a time when the only traffic was pedestrian, cyclists and horse. They do not meet the needs for today's vehicular traffic. The gates are not wide enough and they are regularly damaged. There have been many accidents involving cyclists. The new design will make the junction safer.

"The new design approved by English Heritage and Greenwich Borough Council is sympathetic to the feel of the park and the wonderful vista through the park that they help frame. An archaeologist is present throughout the demolition and ground-works for the project and we will also be trying to reuse as much of the current materials used in the gates as part of the construction."

While the works continue, expected to be until early April, vehicles can only access the park via the Blackheath entrance and have to exit via St Mary's Gate.

Planning permission to re-position the gate, which requires the felling of a horse chestnut tree, was granted by Greenwich Council's Planning Board last month. 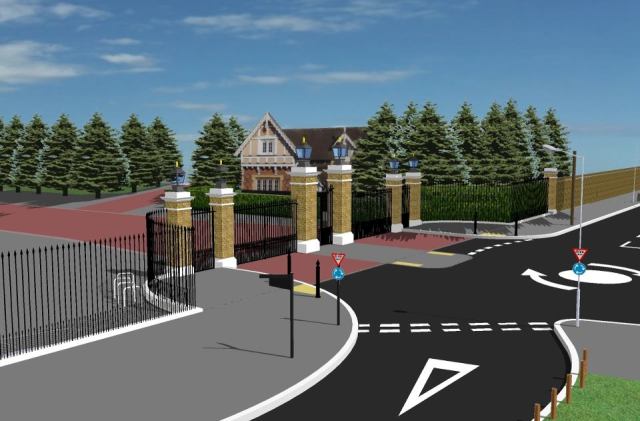 Image of how new gate is expected to look.