I was having a look through my photos to see if I had anything appropriate for today, Christmas Eve. The best I could come up with was this one of Mr Humbug in Greenwich Market. "Bah Humbug" was the catchphrase of Ebeneezer Scrooge, who in the Dickens novel "A Christmas Carol" was visited by three ghosts on Christmas Eve.

It goes without saying that this is the busiest time of the year for Father Christmas, but he has found time in his schedule to come and meet the children of Greenwich to find out what they want for Christmas.

You can find Santa Claus in his wonderful grotto, inside Greenwich Market (unit 5b) from Saturday 20th December until Tuesday 23rd December - 10am to 5pm. Go along and meet Santa, share your Christmas wish with him and receive a delightful gift too. The price of admission is £3. 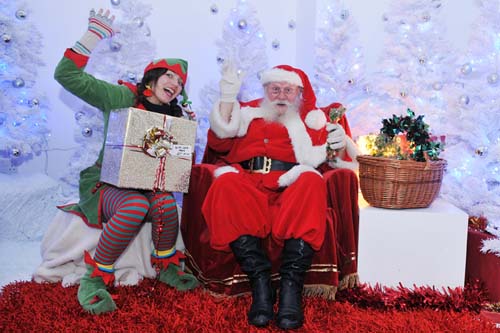 See the Christmas lights in Greenwich get switched on by the cast of Greenwich Theatre's "Jack In The Beanstalk" on Friday December 5th. The fun starts at Greenwich Market at 3pm, and then at 4pm a magical lantern procession will make its way from the Old Royal Naval College along to the market, via the Cutty Sark Gardens Christmas Tree of Light.

Mayor of Greenwich Cllr Steve Offord, will then join the panto cast for the official switch on at 4.30pm.

In anticipation of the event, the Mayor said, “Greenwich Lights Up is always amongst the borough’s most popular festive events and I’m sure it will prove to be a great occasion as always. On a personal note, it will be a great honour for me to join the cast of ‘Jack and the Beanstalk’ to help switch on the Greenwich Market Christmas Lights and I would like to encourage everyone to make the effort to come down and enjoy the start of the wonderful festive season in Greenwich.”

Santa will be in his grotto in Greenwich market from noon to 7pm, with a gift for every child.

Are you going to the switch on? Greenwich.co.uk has a £10 Amazon gift voucher for the best photo or video from the switch on. Email entries to the editor. Wednesday's in Greenwich market mean fresh produce and food to go. I think this was a hog being cooked on the spit.