A multi-faith prayer space has opened on Greenwich Peninsula near to the O2.

The space was formally opened at the end of October by the Mayor of Greenwich. It exists to provide a quiet space for prayer as well as being used for regular worship events. Services are held weekly by Church of England, United Reform Church, Muslim and Baha'i worshippers.

The building is the result of an agreement between the developer, Greenwich Peninsula Regeneration Limited, and Greenwich Council. The local faith groups that use the building are contributing towards the ongoing cost of managing it.

The prayer space, which is open daily, is also home to chaplaincy services on the Peninsula which are provided by volunteers to local businesses and organisations. 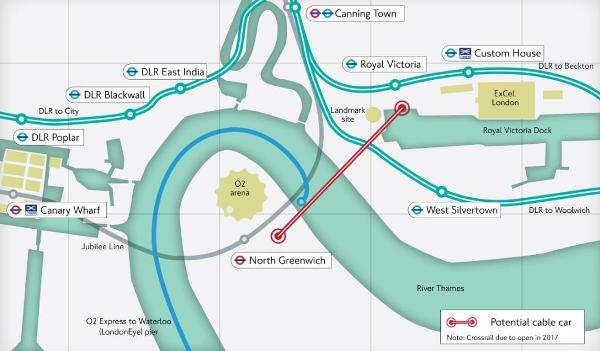 From left to right: 6 Mitre Passage, 14 Pier Walk, the new Ravensbourne college and then the O2 arena.

Mitre Passage, like 14 Pier Walk, was designed by Terry Farrell and Partners, and from the exterior puts me in mind of a magic eye picture.

The Peninsula restaurant in Bugsby's Way has been handed a fine of £13,500 by Woolwich Magistrates.

The hefty fine was issued last Monday after a number of food hygiene breaches were found in an unannounced inspection by Environmental Health officers at Greenwich Council.

During the inspection, officers found:

Peninsula restaurant, which is in the same building as the Express by Holiday Inn hotel, pleaded guilty to the offences and were charged £13,500 and ordered to pay the council's costs of £6,800.

Councillor Maureen O’Mara, Greenwich Council’s Cabinet Member for neighbourhood services, said: “The Council will continue to carry out unannounced visits to food businesses and will take necessary action to safeguard customers’ health. It is essential that food businesses take all the appropriate steps to ensure general food hygiene standards are met". The Greenwich Peninsula Ecology Park provides a stark contrast to the modernity of of the O2 and surrounding buildings, and yet is only a few minutes walk away.

A planning application has been lodged with Greenwich Council for the construction of a 452 bedroom hotel next to the O2 arena.

The large development, on what is known as plot NO301, would also include a separate 22-storey tower comprising of 100 serviced apartments, a ballroom & events space and a health spa.

The Evening Standard quotes David Campbell, of AEG Europe, as saying: “The O2 has already created more than 2,500 direct jobs in Greenwich. However, the real economic prize for Greenwich and east London is adding overnight visitors.”

At present the nearest hotels to the O2 - recently named as the in ticket sales - are the Express by Holiday Inn and the Pilot Inn guest house.

The planning application and association documents can be seen in full at the Greenwich Council website.

Greenwich Yacht Club put on a pantomime for its members and selected guests yesterday afternoon. The fundraising production was titled Blazing Paddles III, and Mary Mills went along to enjoy the show - here's what she made of it:

Greenwich Yacht Club doesn’t seem the most obvious place for thespian endeavour – let alone an actual panto. Yet they do seem to put something on every year with a cast of thousands. It also seems you only find out about it by accident – so thank you Roger, for telling me at the last minute that it was on, and I really enjoyed it. (Roger, with his triple candelabra, is the musical director).

So this was all about the adventures of Dick Dangler and his faithful Puss cat who had to get the beanstalk Giant to eat chocolate instead of mud so that they could join Greenwich Yacht Club and save beautiful Virginia from the evil clutches of Commodore Tacktightly - or at least I think it was. Tacktightly came from Little Luffing, elsewhere on the river – and as Barnacle Bob explained he could face any danger on the high seas “but its people from Erith I can’t handle”. The whole thing was saved when the Giant took up with Virginia’s sister Chlamydia helped by the ministrations of Flossie, the Woolwich Free Fairy. Anyway, everyone married everyone else in the end so it must be alright.

The cast was headed by the redoubtable, current Club Commodore., Nick Day as Commodore Ophelia Nobbes – with a mountain of blue hair and an impressive bosom. Backing was provided by the GYC Combined Foot and Mouth Chorus who enthusiastically sang a vast selection of songs - anything so long as it had the word ‘sailing’ in it somewhere.

I suppose all there is left to say is that a good time seems to have been had by all and that proceeds will go to a selection of charities headed by the RNLI. Another photo from yesterday's walk around the Greenwich Millennium Village. 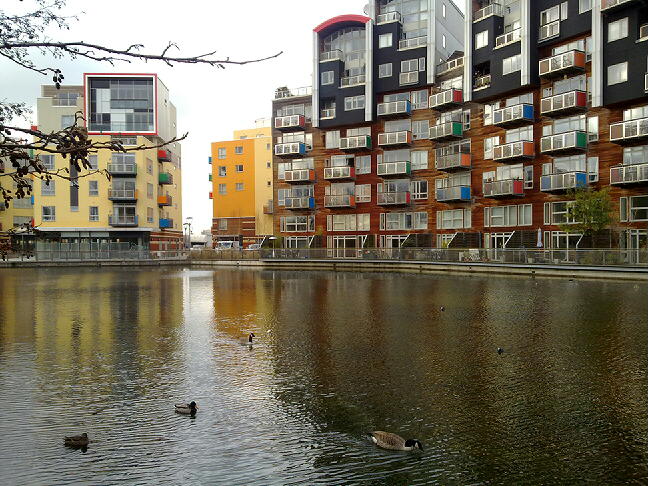 I took this photo of the GMV from the boardwalk running through Greenwich Ecology Park.