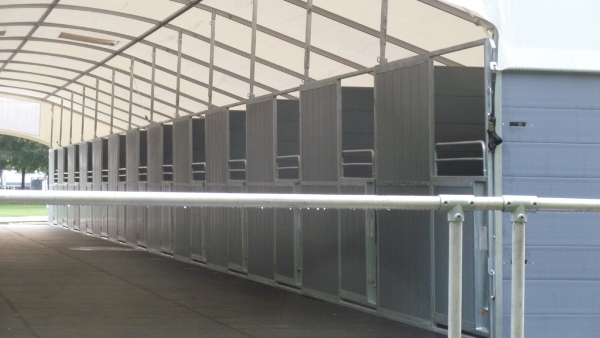 Thanks to Gordon Coster for this photograph of the stables that have been erected in Greenwich Park for this summer's equestrian test event. Work on the arena for this summer's London 2012 test event in Greenwich Park is all going to schedule, organisers told journalists at a press briefing today.

Contractors are busy putting together the large platform south of the Queen's House where 2,000 people will be seated to watch the Greenwich Park Eventing International in July.

Hundreds of specially strengthened legs are being laid down with the platform segments fitting on top.

The modular nature of the platform makes it easy to put in and take out, said organisers, and it can be used for a variety of purposes - Olympic gold medallist Usain Bolt recently ran a race on the very same platform that is now being set-up in the park.

Work will soon begin on the cross country course and from June 1st, most of the eastern side of the park will be inaccessible apart from the playground and Flower Garden.

Tickets for the test event are being made available to local school children and to residents via a council-run ballot. Greenwich Council has 1000 tickets for this summer's London 2012 test events in Greenwich Park to give away to local residents.

The test events will take place in early July in Greenwich Park and residents who want to attend are invited to enter a council ballot.

Cllr Chris Roberts, Leader of Greenwich Council, said: “A hugely important element of the Council’s work with LOCOG has been concerned with maximising the opportunities for local people, especially young people, to be involved in the Games and be a central part of local preparations.

“These events will allow local residents and schoolchildren an early opportunity to experience the atmosphere of world class sporting events ahead of the Games proper next year.”

Information on how you can enter the ballot for tickets, limited to two per application, can be found on the council website.

Local people wishing to know more about the test events can meet London 2012 organisers at "drop-in" sessions being held this week in Greenwich Park. The sessions will be held in a tent next to the Tea House in Greenwich Park tomorrow, Friday (both 10am to 8pm) and Saturday (10am to 6pm). 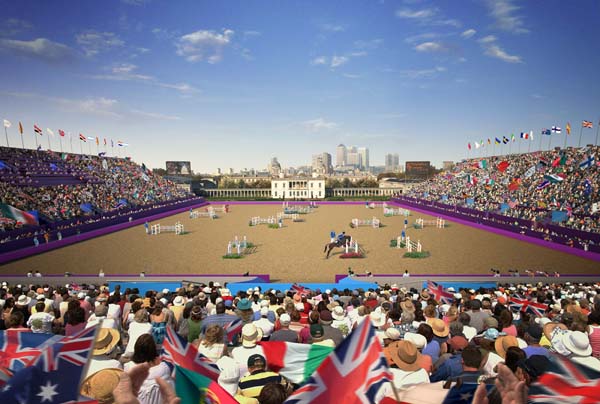 A batch of images was revealed last week which illustrate how key venues will look during the London 2012 Olympics. This artist's impression was carried out by Populous on behalf of the London 2012 organisers. Copyright belongs to Populous.

London 2012 organisers have revealed the schedule for next year's summer Olympics.

The Crown Prosecution Service has abandoned its case against a protestor alleged  to have damaged course markers for the London 2012 equestrian events in Greenwich Park.

Edward Hill, 62, was accused of causing criminal damage to the white feather markers in Greenwich Park with a kitchen knife.

He pleaded not guilty when he appeared before Woolwich Magistrates Court last month and opted to be tried by jury at Crown Court. Dave Townsend, for the Prosecution had told magistrates: “This is our first anti-Olympics case.”

Prosecutors have now decided not to go ahead with the trial. A CPS London spokesperson said:

"During the life of a case the Crown Prosecution Service has a duty to keep cases under regular review.

"At a very early stage in the proceedings a review of this case concluded that it was not in the public interest to pursue a prosecution through the court as punishment in the form of a caution would be a suitable alternative.

"As such the case has been discontinued."

Prices for the events start at £20 and go all the way up to an eye-watering £2,012 for the best seats at the closing spectacular.

Prices for the basketball events at the "North Greenwich Arena", as the O2 Arena will be known at the time of the games, start at £35 during the Quarter Finals and rise to £425 for the best seats for the Men's Final.

Some events, such as the preliminary rounds of the equestrian events, will have "special pricing" which means kids under 16 only have to pay their age and pensioners will pay £16.

The Mayor of London, Boris Johnson, to make available to London children for free, adding to an existing pool of 50,000 free tickets which means that one in eight school kids in London will get free entry - but with no preferential treatment for host boroughs such as Greenwich.

Cllr Chris Roberts, Leader of Greenwich Council, reacted angrily to the news that only an eighth of London's school children will get access to free tickets:

"Olympic organisers have had five years to plan a ticket allocation which would permit the children of the Host Boroughs to attend the Games taking place on their own doorsteps. Instead 7 out of 8 schoolchildren will be denied that chance.

"The children of the East End were used by the Olympic organisers to win the bid for the Games in Singapore, they have been called upon endlessly to take part in photo-opportunities to build support for the Games and are even used in consultation groups to advise on how to run the Games and build a legacy. In return only one thing has been expected - a ticket to see the events. At least 7 out of 8 children will be locked out by LOCOG.

"Repeatedly, the Olympic Host Boroughs have offered to buy tickets for their children but have been refused. LOCOG don't want the authentic East End , they don't want our money, they certainly don't want our kids."

Tickets will go on sale in March 2011 and you can pre-register now.

Cllr Nigel Fletcher, Deputy Leader of the Conservatives on Greenwich Council  and their spokesman on Culture and the Olympics, commented this evening:

"It's great there will be large numbers of free tickets for children across London - and that Boris is ensuring there will be even more. Whilst it might be nice for us to have more as a host Borough, that was never the understanding I had from LOCOG of the arrangement, and I'm rather surprised at Chris Roberts' outburst, when he must have known that."

AN ANTI-OLYMPICS campaigner appeared in court today charged with criminal damage and possession of a bladed article.

Edward Hill, 62, of Foyle Road, Blackheath, pleaded not guilty to the charges at Woolwich Magistrates Court and opted to be tried by jury at Crown Court.

The activist is accused of using a kitchen knife to cut feather markers showing where equestrian events are due to take place at Greenwich Park during the London 2012 Olympic Games.

He is also alleged to have used the knife to dig into the ground in the royal park on September 23 this year.

Dave Townsend, for the Prosecution told magistrates: “This is our first anti-Olympics case.”

Mr Hill, who appeared without representation, was told that the magistrates could deal with the case.

But the defendant, who is a local artist and member of Transition Westcombe,  opted for a jury trial at Woolwich Crown Court despite being warned that costs of £1,500 could be payable if convicted.

He was granted unconditional bail pending his next appearance at Woolwich Magistrates Court next month for committal to Crown Court.

On Tuesday night, after a marathon session of the Planning Board, consent was given - with conditions attached - for London 2012 to use Greenwich Park as a venue for the Equestrian events and Modern Pentathlon.

"This decision means we can concentrate on working with LOCOG, Royal Parks and other key stakeholders to deliver a spectacular event in 2012.

"The planning application was subject to extensive consultation and generated a large number of responses. All this feedback has been carefully considered, and a number of planning conditions have been applied to address the issues that were raised.

"We will work closely with LOCOG to ensure these conditions are met and that we safeguard the Park and surrounding area to preserve its unique and special character."

“Whatever your view of the plans, it was right that the views of residents were properly heard by Lord Coe and his team, and by the Council. I want to see that public engagement continuing now that the application has been approved, including as many residents as possible. After last night there can be no doubt how much people love the Park. We will continue doing everything we can to ensure there is no damage to it as a result of LOCOG’s plans, and to ensure the Games are good for Greenwich.”

Green Party council candidate for the Peninsula Ward, Darryl Chamberlain, welcomed the formation of an advisory group to oversee the implementation and restoration but added:

"It also needs to meet in public and involve local people as much as possible.

"One suggestion was that amenity groups such as the Greenwich Society should have a role - that's fine, but other locals should be involved too. People should not have to pay membership fees to have a say in what goes on in their neighbourhoods."

NOGOE (No to Greenwich Olympic Equestrian Events), who had fought a long and high profile campaign against the proposal, said in a statement on their website:

NOGOE is disappointed because Greenwich Park itself is the loser. This is a bad day for the protection of the nation's heritage, which will inevitably be damaged despite mitigating measures. We've heard what LOCOG have SAID, now let's see what they DO. There are 42 planning conditions which must be satisfied before these events can take place, and NOGOE will be monitoring their every move.

Greenwich Council's planning board has backed proposals to hold Olympic equestrian events in Greenwich Park in summer 2012, together with test events in 2011.

The 12-member board voted 10-2 to back the proposal after a four-and-three-quarter-hour long meeting at Woolwich Town Hall.

The other members backed approval of the scheme with a string of conditions attached, which include the setting up of an advisory body - including bodies such as English Heritage and Natural England - to oversee works in the park and Blackheath's Circus Field.

The board's formal backing now paves the way for a temporary stadium to be built in front of the Queen's House during 2012, the creation of a cross-country course through the park, and the use of the Circus Field as an operational compound.

LOCOG chairman Lord Coe told councillors that Greenwich Park had "a special place in the hearts of many", describing it as "the beating heart of a diverse community - just ask the thousands of marathon starters who gather there each year".

"Tonight, we ask you to trust us," he said, claiming the Olympics would enable "a young urban audience to witness Olympic and Paralympic equestrianism first hand".

But opposition body NOGOE claimed LOCOG's proposals were not detailed enough, and risked damaging the park's ecology and archaeology. There was also criticism that local roads, particularly the Blackwall Tunnel - would not cope with the demands of an Olympic Games.

"Greenwich Park should be the official 'chill-out zone' during the Olympics - otherwise we will lose tourists when construction starts.

"We could rent out our houses for a small fortune when the Games are on - but we value Greenwich more than that."

In opposing the application, Cllr Poston said the park would be an "amazing theatre" for those watching on television.

Cllr Brighty spoke of the numbers who use the park each weekend, adding "four weeks [of closure] at the height of summer is too much".

But members who backed the proposal sought to pacify opponents. Labour councillor Clive Mardner (Abbey Wood) said he hoped NOGOE members had "added strength" to scrutiny of the proposals, and said he hoped they would continue as construction got under way.

Denise Hyland (Labour, Shooters Hill) said: "My fears have been completely allayed tonight by what I've heard. Passion for the park isn't just felt by those against the proposal."