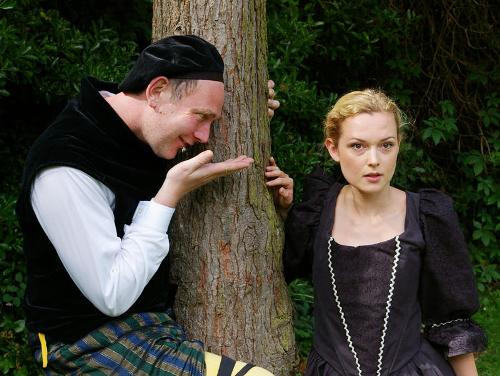 After six years, and twelve productions, Rainbow Theatre’s summer visits to Greenwich have become a welcome regular fixture.  Always genial, witty and committed to presenting Shakespeare’s plays as uncomplicated narratives, their latest offering, Twelfth Night, in the Observatory Gardens, is no exception.

It is a feature of director Nicolas Young’s productions that he engages with the audience at the earliest possible opportunity.  On this occasion Ross Muir and Peter Goode, as Sir Andrew Aguecheek and Sir Toby Belch, made a beeline for the children I was with and gave a very good comedy double act explaining their roles in the story.  After that the ten year old could hardly look at the double-act on stage without giggling, and he wasn’t helped by their bawdy gesturing either.

The style of Twelfth Night was entertainingly exaggerated; with Andre James Storey’s Orsino taking the laurels for his extraordinarily energetic lovelorn duke.  His performance was big enough, and grand enough, to fill the whole of Greenwich Park with unrequited love – appropriately he was almost Olympian in the scale of his supposed adoration of Olivia.   Although this resulted in an unequal match when his real love for a wryly-witty Viola was revealed, it somehow didn’t matter.  The practical logistics of how the marriage might develop were neither here nor there; it just seemed like a good idea at the time.

The sub-plot rivalled the main action for audience interest, but Matt Salisbury’s Sebastian and twin sibling Emily Bennett’s Viola managed to hold their own against a comic tidal wave emanating from Countess Olivia’s kinsmen.  Malvolio stands and falls by the foolery that surrounds him, and Mark Lascelles produced a convincing comic reaction to the nonsense around him.  In particular his cross gartering scene was tremendously funny – and worrying, as he adopted a series of shockingly awful poses echoing the covers of men’s magazines.   Nicolas Young produced a fine comic scene in the garden that rivalled both the recent productions in the West End for comic value.

There is something consistently good-hearted about Rainbow Theatre’s productions; they are pitched to exactly the right level for the venue and the audience.  As the audience were doused with regular showers during the play I wondered how Barry Stevenson’s Feste would deal with his closing song, ‘the rain it raineth very day’.   The answer was that, spontaneously and pleasingly, the audience joined in to accompany him.