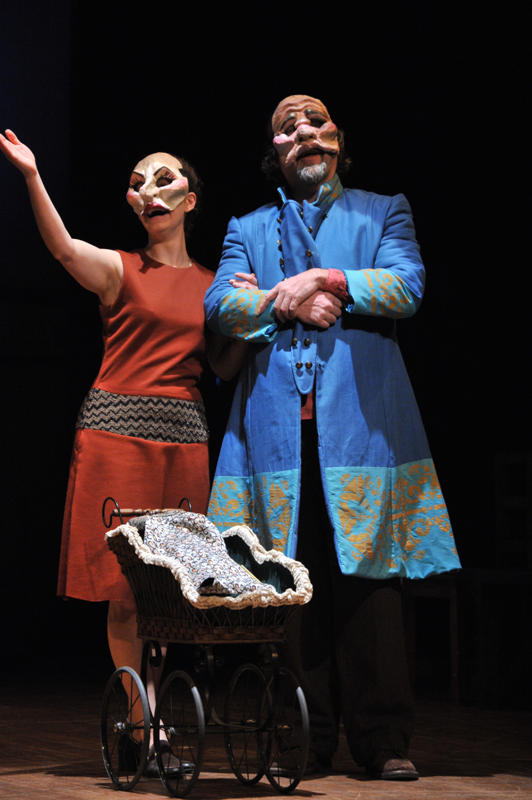 The playwright Brecht’s artistic vision was to address issues of huge significance and confront the audience with them – in short, to make the audience think.  Blackeyed Theatre’s production of The Caucasian Chalk Circle, currently running at Greenwich theatre, does fulfil this aim successfully and in doing so marries the play’s historical setting with current affairs.  Director, Tom Neill, begins by confronting the audience with an energetic debate as villagers aggressively invade the auditorium to argue about land ownership shouting over the audience’s heads; from then on we know we’re going to have to sit up and pay attention.  In this moment the ensemble convey successfully the tensions of all land disputes from the neighbour’s fence to the problems in the Middle East.  This level of topicality is sustained throughout the evening and the story resonates with the big issues of the day on many levels.  Images of today’s politicians, protests and riots are projected onto the walls of the set. I found this quite effective, but at times lost track the thread of the visual argument.

The set is simple, yet everything is significant, and there is no starker image than the noose that hangs over the stage.  During the play the noose also becomes a mountain and a river across which one of the characters makes a perilous journey.  Part of the excitement of the evening was to see how the props that littered the stage were going to be used, and then reused to create a new scene or image.  Every element is imaginatively used in a production that is endlessly inventive.   The use of a violin as the baby at the centre of the story had a real poignancy, and the fragility of the instrument that, like a baby can scream pretty loudly, was delightful.  I did wonder if, as the baby grew, the violin would transform into a viola and cello, and I was rather sad when it didn’t.

The ensemble consists of five very talented actors, but on occasion it is stretched to convey the numbers of characters that Brecht creates.  This leads to an awkward ending where the child at the centre of the story is literally pulled between his birth mother and foster mother.  No matter how inventive the direction there is no getting away from the fact that a good deal of the impact of the moment is lost is having one character play both roles – however true to Brechtian intent the action might be.  In other respects Anna Glynn’s performance, the actress who played both parts, was the highlight of the evening.  She moved between the grotesque masked character of Natella and the more sympathetic Grusha with real ease.  I was moved by the contortion of her body that created, at times, genuine shock and despair.

It’s important to say that the evening was also fun – the ballad singing of Paul Taylor held the story together with an easy charm and the musical accompaniment was both witty and had punch.  Many of the characters, no matter how grasping or revolting, had a comic sensibility and laughter was not in short supply.

As the story developed I felt the pace of the action dipped slightly in the middle of the second half, but I was impressed by the ability of the actors to drive the story forward and it wasn’t long before the two intertwining stories grasped my attention again.

‘The Caucasian Chalk Circle’ is a play of enormous scope and creates a huge vision of the interplay between individual and the state.  Blackeyed Theatre’s production is one of the most successful productions of the play that I have seen.  It remains true to those elements of theatre practice that Brecht was particularly known for, and as such it was also a real education for the audience and the many students watching.