Sausages.  Drings.  Drings Sausages.  The words roll off the tongue like National and Maritime.  I’ve heard the sausages lauded on Radio London by Drings regular Danny Baker, eaten them at scout barbecues and sampled the World Cup special variety created in the green, gold and black colours of the South African Flag.  The latter were superbly tasty, and I’m hoping they can be rolled out again for the Brazilian World Cup (only they’d have to miss out the black bits).  The creative team at Drings might be stretched for the Olympics and, perhaps, that’s why they are spreading their wings with a series of sausage making workshops.  Maybe they are looking for new ideas from their eager amateur sausage trainees for celebratory special editions, bangers to mark the opening of the Cutty Sark, chipolatas to slip into a toad in the hole for the completion of the foot tunnel renovation…I might be getting carried away. 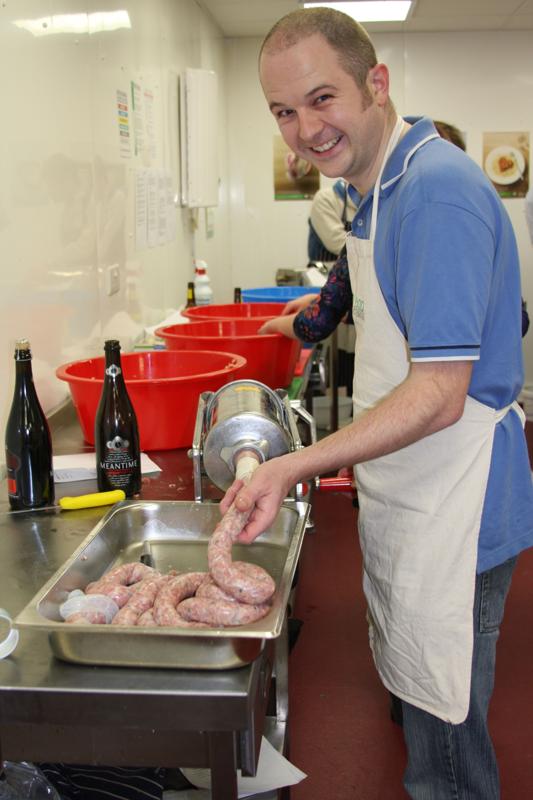 With a little trepidation about the gory side of things, I joined the eager group of wannabe butchers who turned up for a Monday evening sausage workshop after a dull, February-grey working day.  The kitchens Drings were using were those of the Greenwich Co-operative Development Agency on the Greenwich Centre Business Park.  The facilities were first-class; the gleaming surfaces made us feel like real chefs.   The ‘sausagees’ were provided with aprons, although we had been warned to wear old clothes in case we got the odd bloodstain.  I’ve never been hugely keen at looking at large lumps of dead meat, but I became curiously sanguine when faced with a whole side of pig (organically reared Blythburgh pork).

Butcher and Drings owner Michael Jones’s enthusiasm was infectious; he started with a potted history and geography of the sausage covering, amongst other places, Iraq, South Africa and Northern Europe.  He took us through facts about sausages that appeared to have hitherto eluded most of the group and made us feel we were on the road to becoming sausage archivists.  It sounds odd but it was compelling stuff – but still the side of pork beckoned.  Health and safety and knife handling were all that stood between us, chasing down the ribs, de-boning the pork and having a bottle of beer.  The knives were razor sharp and Michael gave much excellent information about how to handle one; use a steel and get a knife ground.  Then we were let loose – suddenly the room went quiet as the group got down to work. With knives that were sharp and fingers that were hopelessly amateur there wasn’t much room for error.  Mercifully all went well and the group breathed again.

Michael’s partner in butchery for the evening was Andrew; they have worked together at Drings for two years creating their own sausages on site.  He produced a dozen bags of mince he ‘had prepared earlier’ for us to make our first unseasoned Italian sausages.  Handling the mixture was like kneading bread; a very therapeutic activity.  Instead of silence there was thumping, scraping and satisfied punching of the sticky mixture – who would have thought that releasing the protein could be so satisfying?  The machine for piping the sausage did look like a spaceship from Flash Gordon, all aluminum and hinges.  Although Andrew allowed the sausages to effortlessly gush in one long stream from the machine it wasn’t to be quite so easy when the amateurs took control.  Loading the machine and turning the crank had all the joy of playing the game Mousetrap – except with edible results.  The whole process was great fun, but looking two yards of sausage in the face was just the start of the trouble, and we were soon to learn the technical term for ‘trouble’; linking.

Linking was the highlight of the evening, it was like knitting with spaghetti, or, as my neighbour described it, balloon modelling with meat, and he nearly did make a poodle.  I can’t repeat the twisting and looping action that we learned, but Michael and Andrew nursed the group through it with care and enormous attention.  The sense of achievement that each member of the group felt was tremendous, comparing the size of each others sausages was, of course, a favorite occupation and ribald comment was the rage.  Now Michael and Andrew really cut us free with another 2kg bag of mince and a table laden with crumb, herbs, Meantime Chocolate Beer and so on. Our job was to concoct a sausage of our own to take home.  I quickly lost track of what I’d put in, but I know that chocolate beer, mace and apple played some part.  22 chains of sausages look very impressive, and that is what the group had made by the end of the evening.  The links had become more regular as time passed by and it all looked pretty professional, not bad for three hours work.

The evening concluded with Drings sausages in buns and Meantime Porter for refreshment, an almost perfect combination.  There wasn’t a dissatisfied customer in the kitchen.  If you want to know what goes into a sausage there’s no finer place to start – although Michael was curiously quiet on the subject of black pudding.  One of my fellow ‘sausagees’ was anxious to tell us how much better it was than the Red Letter Day experience he had been on.  That might be because Michael and Andrew weren’t just good teachers; they were great.  They were clear, interesting and fun – I suggest Drings put that in a sausage and sell it behind the counter.

I came home with my DIY haul feeling like the hunter-gatherer returning from a particularly good day on the Thames Estuary flood plain.  Now I’ve just to get them out of the freezer and test them on the family.

Michael will be running more sausage workshops, but his next venture is an evening of beef, provisionally booked for March 7th.  He’ll look at the whole animal, including cheaper cuts, so you might make your money back when you visit his shop. The price is £85, which might seem a lot, but I came home with plenty of meat, had food, a good time and was genuinely impressed by the art of sausage making.  You can follow Drings on Twitter as well as contacting them at Info@drings.co.uk. 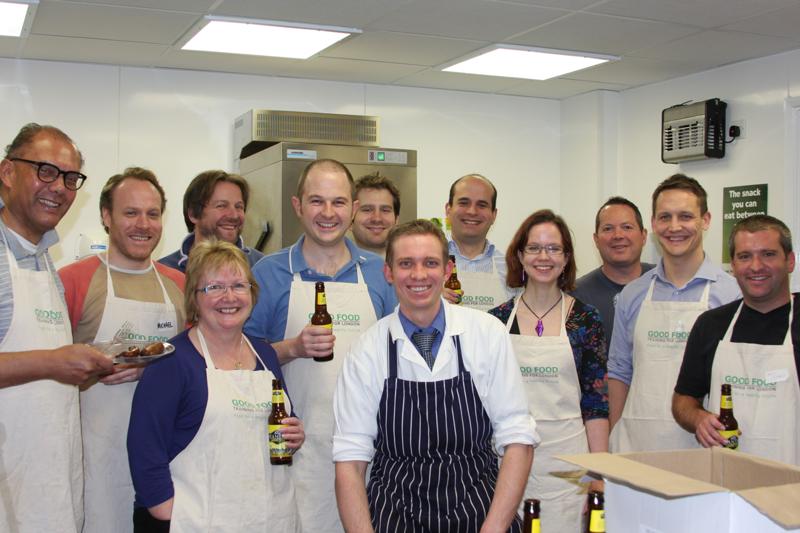