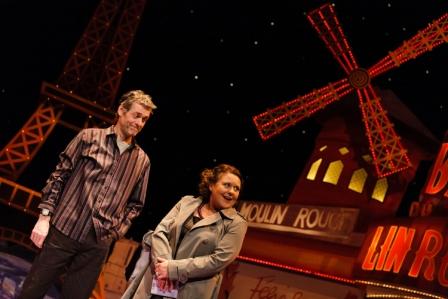 The fine revival of April in Paris, currently playing at Greenwich Theatre, isn’t going to set the world alight, but it will bring the warmest of glows to what is, at the moment, a gloomy old world.  The outlook is as bleak now as it was in 1992 when the play was written.  The play is set against talk of redundancies, job insecurity, pit closures and lack of money, themes that seem horribly familiar.  The outlook is grey, the set’s grey, the costumes are grey – even the tomato sauce bottle fails to provide any splash of colour.  Add into the mix a couple who have grown out of love and the play seems an unlikely source of comic entertainment.  The only pleasure for the husband and wife trapped in a black and white world comes from the dry, acerbic banter that Bet and Al have honed in the relentless drudgery of their lives.  At the start of the play their sharp overlapping dialogue provides the bleakest of humour, neither really listening to each other, and both seeking either the security of the garden shed, or the shoe shop, to hide from each other as their 25 year old marriage disintegrates.  A hint of relief comes in the shape of a competition entry, an escape route that Bet dreams of; it is a dream that comes true.

John Godber, the director and writer of the play, creates startlingly simple transformations of scenes as the audience effortlessly journeys with Bet and Al towards France after they win the prize of a romantic weekend in Paris.  The play literally brightens; colours are introduced into the costume and set as none- too-subtle symbols of Al and Bet’s transforming relationship.  The snappy dialogue jokes, that seemed pointed and vicious, become tokens of affection, and the warm glow that I spoke of earlier begins to fire up both the actors and the audience.   The second half begins with a dazzling scene change as a new set is revealed, comically echoing the cartoon-like style of the film An American in Paris; perhaps Godber toyed with A Northerner in Paris as an alternative title.

Wendi Peters, familiar from Coronation Street, returns to Hull Truck after many years to play the role of Bet.  She has a marvellously grumpy expression throughout most of the first act; there is something of Les Dawson about her curled lip and introverted body language.  In Paris she transforms herself, blossoming before the audience’s eyes, taking advantage of snatched moments offstage to effect a myriad of small but significant off-stage changes so that, eventually, she flowers in more than one respect.

Rob Angell’s changes as Al are rather more subtle. There are fewer evident visual alterations but at the end of the play we see a man who stands taller and who has gained self respect – even if his new found dignity is comically challenged by muggers in the Paris metro.  Godber has a romantic sensibility, a belief in the power of humans to transform, and Al’s development as a painter exemplifies this aspect of his work; perhaps it is the latent teacher in Godber that never likes to give up on a lost cause.

The pair of actors are pleasingly at home in the play and appear entirely comfortable with the style of the piece, dipping in and out of scenes to share their thoughts with the audience; they act as a perfect foil to one other.  Their use of mime can conjure steak tartare out of nothing, and their evident physical skill makes the disco on the P&O ferry one of the funniest scenes in the play.

Godber’s theatrical style will come as no surprise to anybody who is familiar with plays such as Up and Under, and Bouncers (Hull Truck’s last play to tour to Greenwich), but it is always a pleasure because it is unfailingly witty and gently humorous.  It is a shame that the audience for the show at Greenwich was so small, it deserves better.  Godber’s plays are never less than polished entertainment and frequently hold a very large mirror up to the audience so we can reflect on out on lives – in the politest and wittiest way.

April in Paris continues its run at Greenwich Theatre until Saturday 19th March.