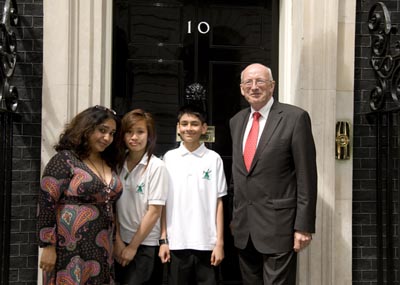 Ramandeep Pawar, 13, wrote to Nick Raynsford to ask him to invite Gordon Brown to John Roan School. The Prime Minister instead wrote back to Mr Raynsford inviting him to bring a group from the school to visit 10 Downing Street.

Ramandeep brought along 23 of his classmates, two teachers, and Headteacher Des Malone, along with him as they took a tour behind the famous black door.

Nick says: ‘It was a real pleasure to accompany children from the John Roan School on this visit. I was particularly impressed with Ramandeep’s initiative in contacting the Prime Minister. This shows that politics is relevant to all ages, and demonstrates John Roan’s commitment to encouraging their pupils to become active citizens in the community’.