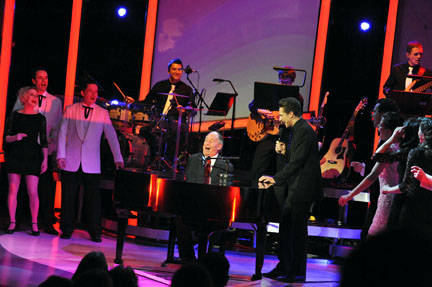 Neil Sedaka at the piano with actor Wayne Smith and cast on the opening night of Laughter in the Rain, a new musical about Sedaka’s life. Photo: Churchill Theatre

Monday night in Bromley and a sea of grey heads in the stalls greeted us. They were here to see a new musical about the life and times of Neil Sedaka, who started his rock-n-roll career in the 1950s and is still going today.

Much to my shame I thought he was dead, provoking peals of laughter from the theatrical crowd I was with in the interval bar. “No! He’s alive!” chastised one, a West End actress and Greenwich glitterati.

And still going strong by all accounts: he turned up in Bromley for the opening night of Laughter in the Rain last week and was so taken with it he changed his flights so he could see it again. ‘Forty of my songs, three hours, audience on its feet, all about me…’ You can understand why he called Heathrow.

Sedaka started life sharing a two-room flat in New York with his family and three aunts. As a child his mother encouraged him to play the piano with a career as a concert pianist in mind. But rock-n-roll happened and the teenage Sedaka rebelled and started writing songs with geeky neighbour Howard Greenfield. Together they formed a musical partnership that sold 40 million records between 1959 and 1963.

Stardom faded abruptly in the face of the ‘British Invasion’ by the Beatles in the 1960s, which left him skint. But a 1970s comeback helped by Elton John put him back on top. Now he’s a legend, with a new album out this year.

It’s an interesting tale spanning six decades – rags to riches to rags and back to riches – and it’s told simply and well. It could do with delving deeper into the darker years to give it a bit more emotional narrative, but it skips along at a pace from hit to hit.

And that’s what the audience is there for: the songs. A full house would guarantee dancing in the aisles. A three-quarter house on a cold Monday night and we only danced at the end. A weekend crowd would be a lot of fun.

Wayne Smith plays the lead. His voice is beautiful. He sings flawlessly in almost every song – some feat. But two scenes nearly steal the show. Kieran Brown as Tony Christie singing Amarillo could easily bring the house down if cheesed up. And Kieran Brown (again) as Elton John could, if camped up, run away with the night. Both scenes are kept in a lowish key, probably for that reason.

The set is effective. A cinemascope style screen shows film footage and photographs from the time to lend authenticity and occasional poignancy. The clarity of staging lets the music shine through.

All up it’s a lot of fun, and a rollicking good show. A bit of tweaking on its way round the theatres of England as it tours this summer (Elton John needs new glasses, for starters) and the West End must surely beckon.