If you’ll forgive the pun, ‘The Tempest’ takes the Observatory Gardens, in Greenwich Park, by storm. The Oxford Shakespeare Company use the space more creatively than other groups that have visited the gardens in the past and they tell the story with admirable clarity. The text is cut down to an hour and a half, which may seem over hasty, and certainly there is little room for fully rounded characters to emerge, but the shortened version allows for a constantly energetic and captivating telling of the story – and all before the park gates are locked.

In director Mick Gordon’s production the audience is set in a circle, ringed by flaming torches. The idea that that we form the boundary of the island is a strong one, and is emphasised when Miranda appears in a huge wedding dress with a flowing train that circles the stage, forming a pink beach.

The ensemble is small for a play with such a vast range of parts, but the doubling is handled with considerable ingenuity and wit. Caliban doubles with Ferdinand, which makes for a very interesting dynamic, allowing the animal side of Ferdinand to emerge and creating a more human portrayal of Caliban. 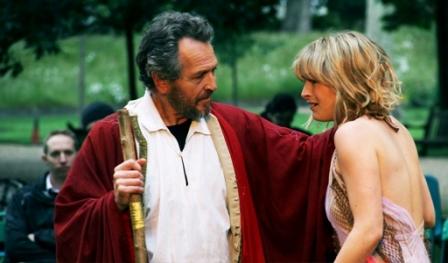 Michael Hadley and Sophie Franklin in The Tempest

At the heart of the production is a fine performance by Michael Hadley as Prospero. The proximity of the seating allows the audience to get exceptionally close to the action, and that helps us see the tension that flows through Prospero when, for instance, he confronts his errant brother at the end of the play. The clarity of Hadley’s verse speaking sets a high standard for the rest of the cast and, for the most part, they match him in all aspects.

Miranda, played by Sophie Franklin, is of particular note; she conveys an excellent urchin-like quality, full of mischief and wonder. The moment when the scales fall from her eyes and she discovers that the world is populated by men is very effective.

The costumes, created by Adrian Lillie, are colourful and creative evoking a sense of faded Edwardian grandeur. The actors jump in and out of them throughout the play fully within the audience’s sight – often with seconds to spare before they emerge on stage, a formidable technical challenge. Nicholas Lloyd Webber (yes he is a relation) has composed an exciting score. His percussive musical accompaniment to the tempest itself, hammered out on a vast copper cone dominating the stage, is as arresting a sound as it is a visual image.

There are elements of the play that seem unnecessarily complicated, including accents that I think were meant to clarify the doubling, but didn’t. There are also some arguable decisions regarding moments of clowning, it might just be me but I felt the gag of having Sebastian in snorkel and flippers outlived its comic potential pretty quickly and introduced an awkwardly contemporary feel to the costumes.

If you are looking for a highly nuanced production that fully explores ‘The Tempest’ I would head for the Bridge Project at the Old Vic. If, however, you are prepared for a high velocity telling of the story in a fantastic setting, possibly with a child or two in tow, then Greenwich Park is the place to be.