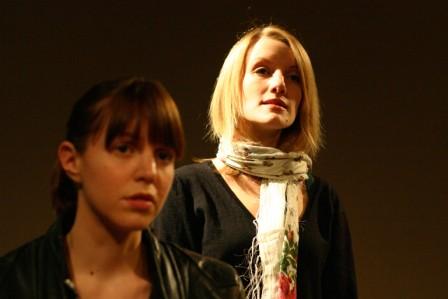 ‘The Laramie Project’ is the result of an imaginative collaboration between Wild Oats Productions and the Greenwich Theatre; it is a moving and challenging piece of drama. The play is a piece of ‘verbatim theatre’ that draws its script from eyewitness accounts of an actual event. This style of theatre can be effective and affecting, and so it proves on this occasion. The actors forensically dissect the circumstances around the brutal murder of Matthew Shepard, and in the process unpick the small town community of Laramie, Wyoming (population 26687), revealing frightening attitudes towards its gay community. The depth of the tragic subject matter might frighten a potential audience off, but the production has an engaging lightness of touch and a keen sense of the human comedy from which hope eventually emerges.

The eight members of the ensemble play an extraordinary range of characters, changing role from moment to moment, adopting elements of costume that become key to identifying their characters. Islamic feminists, pastors, bar tenders and doctors emerge from the narrative to give their take on the events before they fade into the background of the story. Director Joseph C. Walsh succeeds in organising the staging effectively, leaving the audience in no doubt as to where their focus should lie. He also uses theatrical trickery to great effect, pulling us into the story and making the connection between the actor and the audience more intense.

The play successfully relies on the talents of the actors’ characterisations to maintain the pace of the narrative. Throughout there is a tremendous sense of energy on stage and the actors’ commitment to telling Matthew Shepard’s story is apparent, so much so that it almost becomes a mission. It would be difficult not to be deeply moved by the speech that Francis Adams makes, in the role of Shepard’s father, when addressing a court on the question of the death penalty. For a play that is largely based on words there are many highly charged visual images, not least the simple opening image where chairs create the fence where the crime took place, with simple coat pegs loaded with costumes echoing the three crosses of the crucifixion. My only significant reservation about this production is in relation to the decision to have two intervals instead of one, which seemed to unnecessarily disrupt the flow of the piece as we were approaching the finely tuned conclusion.

As the evening developed, another piece of verbatim theatre, by the Tricycle Theatre about the murder of Stephen Lawrence, sprang to mind. We have our own hate crimes closer to home and ‘The Laramie Project’ is an important piece of work because, for all its focus on small town America, there are universal truths in this play that give it a direct relevance to our local community.