You are here: Greenwich / News / Spencer Drury on 2012, Schooling and the General Election: Interview Pt3 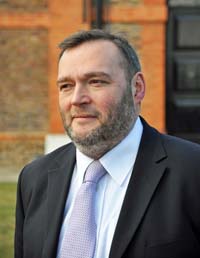 This is part three of Adam Bienkov’s interview with Spencer Drury – Conservative candidate for the Greenwich & Woolwich parliamentary seat and leader of the Conservatives on Greenwich Council. Part one and part two were published on Tuesday and Wednesday of this week.

Hosting the 2012 Olympics has a been a polarising issue in the borough, but the Greenwich Conservatives have so far been relatively quiet about it. Drury himself has mixed feelings about the Games.

He tells me that while the cross country equestrian events will be “fabulous for the park” and an “amazing event” he admits that "this is not the line that NOGOE would like to hear.”

However, he also thinks that the temporary stadium is a “sticking point”:

“The 20,000 seat stadium I have got serious questions about. I mean the fact that it’s a temporary stadium, I’m already thinking is that worthwhile? But where they’re planning on putting it will actually ruin the views down the park to Maritime Greenwich. I mean if you put a great big stadium in front of that then you’re ruining the very views that they seem to want. That seems to me to be self defeating."

He also believes the Council have missed a big opportunity to capitalise on the Games.

“The Olympics have got tonnes of money and as far as I can work out Greenwich as an area is going to have no legacy from it. Well I mean I say no legacy, but there might be trees chopped down but no legacy from it in any positive physical way.”

So will the Games be good for Greenwich overall?

“Well if you could sort out the congestion as a legacy then I think that people in Greenwich would take the rough with the smooth but at the moment we are just getting the rough.   We’re just getting problems from it and we’re getting damage to a much valued park although I don’t think it will be as bad as NOGOE are making out. I really don’t feel that.”

"I think they are representative of a certain group of people in Greenwich but when you go out knocking on doors, I mean I was out in Greenwich last weekend and not one person mentioned it to me. Not one person. Schools, bins and recycling are the things that come up. People are more concerneed about other things. I think that is why you won’t see political parties focusing on it in a major way because on the doorstep it is not the major issue that people are concerned about.”

I’m speaking to Drury after the announcement that the John Roan school will no longer be moved to the Peninsula. He is relieved:

“The plans to put the John Roan school on the peninsula were always ridiculous. They were planning to put a bigger school on a smaller site, five stories tall with a playground on the roof. It was madness.”

While pleased about this, he believes that it is symptomatic of a wider problem:

“The Council’s education policy is in chaos frankly. We’ve still got the worst GCSE results in London.  They’ve improved a lot but they’re still the worst in London. So our kids are leaving education at a substantial disadvantage to most other kids across London.  And that’a huge blow to us and a massive shame”

He supports the Conservative plans to create smaller “Free Schools” run by parents:

“Parental choice is absolutely vital in this and we know parental choice is already happening in Greenwich because so many hundreds of kids at eleven go out of the borough, whether to private or to Grammar schools.  But what’s interesting when you look at the figures is that they are not just going to the Grammar schools they are also going to Welling and other schools along the border with Bexley because they are better run than Greenwich schools frankly.”

Drury is set to stand against Nick Raynsford in Greenwich later this year. I ask him if he knows him well. He tells me that while he sees him annually at the borough's Remembrance Sunday event, he hardly ever comes across him otherwise:

"I think Clive Efford [Labour MP for Eltham] marked himself as a local MP who didn’t care about Westminster very much. Well I think that Nick Raynsford is the opposite to that. There is a local area. He’s aware that it exists, but Westminster is where his heart is."

Like Efford, Drury has a close attachment to the area. Raised in Woolwich and a long standing councillor in Eltham, Drury still lives within the borough.

With boundary changes giving the Conservatives a real chance of winning Eltham, I ask him why he didn’t choose to stand in his home town again:

“I did [consider it] but it was for various personal reasons. My daughter had been in hospital for two months and then my wife became ill as well. It was in the run up to the selection for the parliamentary seat and I came pretty close to just packing it all in frankly. And ironically it was a letter from Chris Roberts asking if everything was okay that changed my mind.

“It made me think think that maybe politics isn’t just about doing silly stunts and playing silly games. That maybe there is a point to it"