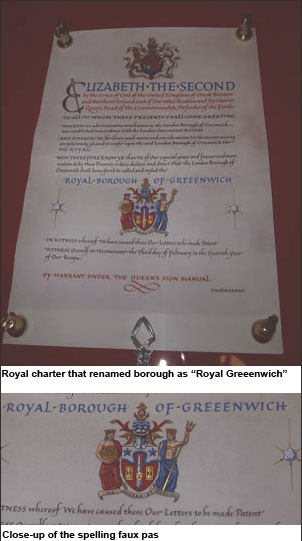 A howling spelling mistake on the borough's Royal Charter has only just been spotted - and it has big consequences for Greenwich.

Due to an error in the production of the document, the new name for the borough was actually declared as "Royal Greeenwich" - with three Es.

The glaring error somehow went unnoticed while the borough celebrated its royal honour in February of this year and Her Majesty's royal seal makes the change permanent and binding.

This website understands a crisis meeting was called after the blunder was first noticed by an 8 year old child who spotted it whilst admiring the document in its glass case at Woolwich Town Hall.

Because of the Queen's heavy schedule in her jubilee year, there is no chance of asking for her consent to change the name again before 2013, meaning the borough will have to see out the rest of the year at least under the name Royal Greeenwich.

With no choice but to accept the accidental name in the short term, the council is in the unenviable position of having to order new street signs and staff uniforms, again, bearing the name Royal Greeenwich. If the name can't be changed, the cost to businesses could run into the millions of pounds.

A constitutional expert told this website that the incident was "deeply embarrassing" for the Palace and the council but "we are where we are, and it would be seen as hugely disrespectful to Her Majesty to ask for a change of name back to Greenwich."

He added, "Spelling mistakes in digital documents are commonly known as 'typos'. This faux pas in the charter is one of the most embarrasing examples of a quillo that anyone can remember."

In recognition of the name, this website is today changing its name to Greeenwich.co.uk.

Yes, don't worry, Royal Greenwich is still Royal Greenwich with two Es. We did catch a couple of you out but as many in the comments noted - but were held in a moderation queue until now - this was a little bit of April Fools' fun. Here's the real Royal Charter below with not a single extra E in sight. 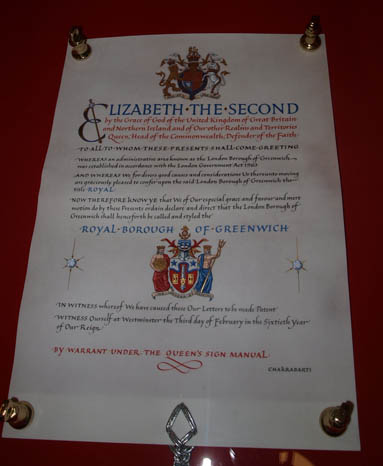