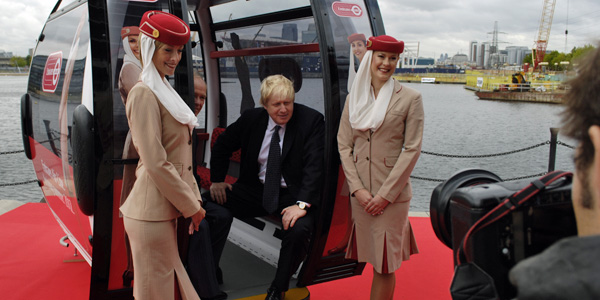 Boris Johnson, candidate for the London mayoralty, has answered the questions submitted to him by Greenwich.co.uk readers...

What are you going to do with the fleet of the New Bus for London? Do you have plans to expand their use to the other routes?

I am proud and delighted that we have elegantly restored a hop-on hop-off platform bus, a masterpiece of 21st Century British design that is delivering British manufacturing jobs. As I pledged in 2008, I got rid of the German made bendy buses, as promised, and we are running the New Bus for London – which costs no more than a hybrid bus - on the number 38 route. This is helping us to deliver on air quality standards with fuel consumption 50 per cent lower than a conventional diesel bus. I will expand the New Bus across London with 600 new buses by the end of my second term. I will do this in a cost effective way, by replacing existing buses as they are decommissioned with the New Bus. Ken Livingstone has now said he wants to cancel this bus, putting British jobs at risk.

I am proud of the work of the Met in the last four years. In the teeth of a grim recession they have continued to bring crime down almost 11 per cent overall; with the Tube 20 per cent safer, the buses 30 per cent safer, robberies on buses down by almost a half; and the murder rate down by a quarter to the lowest rate since the 1960s.
It is important to put ensure the Met has the right resources to fight crime and that’s why in have invested an extra £42million in the service meaning we have been able to put 1,000 more fully warranted police officers on London’s streets at the end of this term than I inherited. I will also boost Safer Neighbourhood Teams, with an additional 2,000 police, and establish Safer Neighbourhood Boards in every borough giving local Londoners and victims a greater voice. I believe that the police should target the crimes that most concern Londoners. I will use my new powers in the Mayor’s Office of Policing and Crime to ensure they are doing that as well.

As Mayor I have of course followed this awful case, and feel intense sympathy for the McCann parents. The Prime Minister announced last year that the Met Police were to investigate the case, and they have my full support in doing so.

Could Boris please tell me if crime is down in London why my insurance premiums have more than doubled in 2 years? All insurance companies have told me the reason it’s more expensive is because of crime.

Comparing my term against the second term of my predecessor, total crime has been cut by 10.8 per cent. Murders have decreased by 25.9 per cent, the lowest rate since 1960s. Robberies are down by 16.3 per cent. But I recognise more needs to be done, in particular in crime ‘hotspots’ as identified by insurance companies. This is why my manifesto Fighting Crime in London sets out two approaches to lower local crime: a renewed focus on neighbourhood policing by boosting Safer Neighbourhood Teams in Greenwich, adding up to three Police Officers and three Specials to every Team; and a push on tackling on business crime by requiring an Assistant Commissioner at the Met to have this specific responsibility.

Why is my train service noticeably poorer; but fares have shot up?

Unlike my predecessor, Ken Livingstone, who made record-breaking fare increases and broken promises on fares twice during his eight years, I have undertaken a major overhaul of TfL to deliver greater efficiencies and drive out waste, delivering £4.6 billion in savings by 2015. Tube delays have been cut by 40 per cent since I was elected and stations are being transformed. The problem we have is that our current system has the creaking Victorian infrastructure. With the population set to grow by another million to 2025 and with rail ridership alone expected to rise by 30 per cent in the next 8 years, we face increasing pressures. So it is time to build on the success of Oyster, which I rolled out to suburban rail, and push for a more fully integrated underground and overground system. In the next few months I will be campaigning for train and platform lengthening on all overground services, taking our overground up to five cars, which will improve journeys from Greenwich. And I want work with the Train Operating Companies to improve suburban rail, then we will also be able to hold fares down below the levels at which they have been increasing.

I have already launched five chapters of my manifesto, which detail my pledges for Londoners. They can be read online at www.backboris2012.com/manifesto. In 2008 I pledged to run the most transparent administration in Britain, publishing all expenditure over £500 and I have delivered on that pledge. I am determined to be honest and transparent with Londoners about what we can achieve, and so all my pledges are funded and feasible, not based on unfunded pledges as some of my opponents’ seem to be. In particular, we can’t afford for Ken Livingstone, who has made at least £2.7billion worth of unfunded promises while campaigning to be Mayor of London.

Why are supposedly high taxes a disincentive to employment, but high public transport costs are not?

I have stood up relentlessly for the interests of the London economy, cutting pointless red tape and crippling taxes, whether they come from Whitehall or Brussels. We need to build the platform here in London for businesses of all kind to invest in. My approach to grow Greater London’s economy is more practical – to protect existing jobs, create new ones, and boost skills and training. Here in Greenwich I have unlocked the Greenwich Peninsula scheme that was left to waste under Ken Livingstone during the boom years. The Homes and Communities Agency (HCA) estimates 4,000 jobs will be created from new development there, which will see 10,000 new homes, 3.5 million square feet of office space and 150 shops and restaurants created. Across the capital, I will directly create more than 200,000 jobs and on average 1,000 new apprenticeships every week over the next four years.
Jobs can be created through sound investments in public infrastructure, which will also enable us to hold fares down below the levels at which they have been increasing.

Why are you encouraging more car use, and more pollution for people in the poorer part of the borough of Greenwich, with another tunnel (Blackwall tunnel relief / Silvertown link)?

London’s transport is not just about rail, tube and buses, but about our roads too. People in Greenwich need better road networks. Less congestion also means lower pollution, improving the environment for local residents. So I will seek powers to construct a new Blackwall relief crossing, a road tunnel that will cross from Greenwich Peninsula to Silvertown, near the Royal Docks, and which will be completed within ten years. In addition, I will commit £50 million to enable immediate action to relieve the worst congestion blackspots in London, with priority being given to those roads which cause the worst delays and blight the communities who live around them.

I have introduced New Bus for London which is around 50 per cent more fuel efficient than a conventional diesel bus and I will roll out with 600 vehicles on London’s streets by the end of my term in 2016. Through my strong relations with Government, I have secured £5 million to create a Clean Air Fund for London to improve air quality in hotspots. I will also continue a 100 per cent congestion charge discount for low emission vehicles so that there is a real financial incentive for Londoners to drive the cleanest vehicles available.

Do you support extending the DLR to Eltham?

The last four years have witnessed significant improvements to the bus network, operating over 18 million more kilometres since I was elected, including the number 132 route extension from Eltham to North Greenwich. There is a case for additional public transport capacity in the area, and planning of future DLR services – including extensions – is part of a London-wide strategy to manage growth in London. I’m committed to more a fully integrated underground and overground system, and in the next few months I will be campaigning for train and platform lengthening on all overground stations, which should help Greenwich commuters.

Can you ask Boris what plans he has to make cycling in Greenwich safer? No sign of super highways or Boris Bikes here yet?

My favourite journeys are through the sun-dappled streets of London by bicycle, so I understand the desire of Greenwich residents to have improved cycling networks. I have launched the Cycle Safety Action Plan which sets out how cycling in London can be made safer. I have instructed TfL to review 500 junctions on its road network to prioritise the roads in most need of change to improve cycle safety and outline what changes are needed. Some improvements and redesign has already been undertaken.

In 2008 I promised the world’s best Cycle Hire scheme, and have delivered it. London has over 8,000 hire bikes, and 15,000 docking points. I will explore expanding the scheme further into outer London town centres, and would be delighted to bring them to Greenwich. I will also triple the number of Cycle Superhighways to twelve by the end of 2015 including Cycle Superhighway 4 which will run through Greenwich.

And finally, why do you think the people of Greenwich should support you in these elections?

I hope the people of Greenwich, like all Londoners, will see that the choice at this election is between taking London backwards with Ken Livingstone’s dangerous and unfunded pledges and wasteful schemes or taking London forward with a fully costed nine point plan to secure greater London’s future. In the last four years, I have made 15 visits to Greenwich compared to just 3 during Ken Livingstone’s second term. I am proud of the practical achievements we’ve made here in Greenwich, after listening to residents and businesses, including 1,074 more police patrols a month, cutting total crime by 17 per cent and robberies by 31 per cent since May 2008 and unlocking the stalled Greenwich Peninsula scheme that was left to waste under Ken Livingstone during the boom years. But there is more to do. In Greenwich the nine point plan means putting an extra £445 back into people’s pockets, securing a £100 million investment to create over 4,000 jobs in the Greenwich Peninsula and investing in local transport with Crossrail access at Woolwich and Abbey Wood stations. I will go further and cut my share of council tax by at least 10 per cent during the next four years through a new efficiencies programme across the GLA Group.

Information on the elections, which take place on May 3rd, can be found at London Elects.