THEY called it the "chicken run." In the mid-1990s, as general election defeat loomed, top Tories started abandoning their parliamentary seats and getting themselves safer ones. Among them was this borough's very own Peter Bottomley, Tory MP for Eltham until he decided he was more likely to keep his job by moving to the rather less marginal territory of West Worthing.

It was seen as a clear signal of the Tories conceding defeat. Labour, both nationally and locally, had a lot of fun at the "chickens'" expense: Frank Dobson, the shadow environment secretary, launched what he called "Operation Chicken Watch," chortling: "The Government says the feelgood factor will win them the election, but Tory MPs don't feel good."

What goes around, comes around. Labour MPs aren't allowed to do what their Tory counterparts did in the 1990s - but there's no such rule for Labour councillors. And ahead of the local elections next May, Greenwich, once again, is at the centre of something that looks rather like a chicken run.

We can reveal that no less a person than Chris Roberts, the leader of Greenwich Council, is to leave his current ward, Peninsula (where Labour scored 45.7% at the 2006 council elections) and has just been selected in the ward of Glyndon (where the People's Party got an altogether more comfortable 59.4%.)

Peninsula ward is essentially East Greenwich and GMV - everything in SE10 east of the Naval College and north of the railway line, plus a little bit of Charlton. It's a more socially mixed, middle-class place than Glyndon, which sits between Woolwich and Plumstead town centres. Peninsula will also be heavily affected by the unpopular plans to close the park and roads for the Olympics - could that be a factor in Roberts' decision?

Denise Hyland, the council's cabinet member for the economy and skills, is also moving, from Shooters Hill - where she was only 118 votes ahead of the Tories in 2006 - to Abbey Wood, where the bottom Labour candidate was elected by a much more comfortable 357 votes ahead of their nearest rival, a Lib Dem. (Labour's share of the vote in Abbey Wood was slightly less than in Shooters Hill, but the anti-Labour vote in Abbey Wood was split between Tories and Lib Dems.)

I couldn't ask either councillor why they are moving - they haven't returned my calls - but Spencer Drury, the Tory opposition leader, says: "I think it does show they're worried, and I think they're right to be worried. I think the council have called a number of issues wrong - for instance, they've made the judgment that they want to organise cuts immediately after the elections and not tell people about them before. The response we're getting on the doorstep is excellent."

Mr Roberts' move is particularly interesting, not just because he is council leader but because his current berth, Peninsula, was not seen as a particularly marginal ward. Seven wards with Labour councillors - including four wards where the party holds all three of the council seats - registered a lower Labour share of the vote than Peninsula did.

If Labour lost all those wards, even if it kept Peninsula, it would lose control of the council. Does that mean Labour is in with a serious chance of defeat? I'm not sure; much depends on whether the opposition in each ward coalesces around one party, or whether it is split between two or three.

With the 2006 elections delivering them 36 out of the 51 seats, Greenwich remains one of Labour's safest councils in London. But Labour got a very bad fright here in last year's mayoral elections. For the first time in decades, if not in living memory, the Tories won more votes than Labour across the borough of Greenwich. In the current political climate, and with a Westminster election likely to take place on the same day as the local poll, no Labour council can be considered entirely safe. Mr Roberts certainly isn't taking any chances.

p.s. Michael Stanworth, the Labour Borough Organiser for Greenwich, has been in touch to say "I can assure you that there is nothing sinister about his move to Glyndon ward, it is just closer to where he lives." Whilst Labour took a drubbing nationally in the European elections, the borough of Greenwich stayed loyal with the party winning the popular vote albeit with a trimmed lead over the Conservatives.

At the 2004 European elections, Labour had a 10% lead over the Tories but this was cut to just 6% in Thursday's vote, which was counted yesterday evening.

The LIberal Democrats and UKIP both saw their share of the vote decline whilst the Green Party and the BNP recorded increases.

Turnout in the borough was 32.44% - down slightly on the 34.90% turnout in 2004. The table below details the number of votes cast for the major parties against their previous performance.

The chart below shows the performance of the major parties verses their performance at the last European elections in 2004 in terms of percentage. 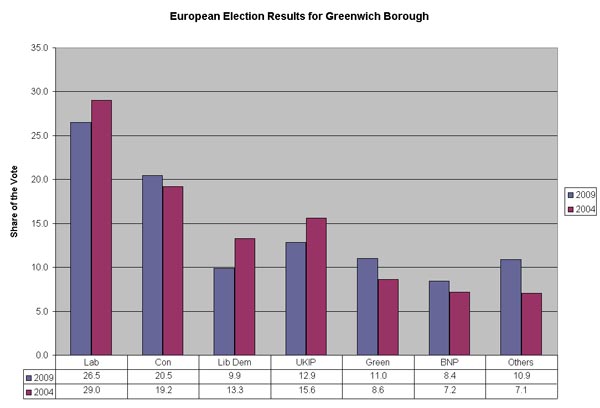 Greenwich Council has the full details of the vote in the borough.

I spoke to the presiding officer at the Randall Place polling station and he said voting had been slow but steady. I was hoping to get a picture of a voter coming out but it just me and him there. Round the corner at the Jubilee Hall polling station in Blisset Street, I met Sam who was a lone volunteer from Labour outside the station and he looked quite happy to see another human being (Say "Hi" if you see this, Sam!) Polling stations opened at 7am this morning and will remain open until 10pm this evening. Go to the Council website for information on the candidates and the polling stations.