Elizabeth, or Lizzie, Cooper owns and runs the popular cafe in East Greenwich Pleasaunce. But Lizzie's association with Greenwich goes back a lot further than that.

"I was born in Greenwich Hospital and when I was growing up I'd go to Greenwich Market. My dad had a stall down Greenwich Market selling antiques and big hoop earrings. Me and my sister would play games where we looked under the table and look at people's shoes to see if we guess what the person would be like."

She's been running the cafe in the Pleasaunce for about three years. "It's beautiful and enchanting here. I fell in love with it as soon as I saw it," she says.

"I love all my lovely customers and I've got to know all their pets and all their children. I love the atmosphere, everyone's so fun and kind. They're very giving and community-focussed." ACTOR, hotelier and broadcaster Robert Gray was born in Malta and moved to Greenwich in the early sixties. He runs a B&B in St Alfege Passage called Number 16 which "gained notoriety on the Hotel Inspector on Channel 5."

Robert's highlight of 2012, he says, was "the Olympics and all the jolly people visiting Greenwich for the equestrian events in the park."

Robert got in to the equestrian spirit by commissioning a topiary horse called Benson, which has been in his front garden since the spring. What now for Benson?

"Well don't tell anybody this but Benson is going to become an installation for St Alfege Advent Windows. He's going to have a bit of a makeover so watch this space from the 16th December."

"They've let me loose with a lot of knobs and controls on Meridian Radio which is really quite scary, a bit like flying Concorde. In fact, I think flying Concorde would be easier."

After fifty years in Greenwich, what is it that Robert still loves about the area?

"Greenwich is such a beautiful and happening place but it still feels like a village because in other parts of London you can live and not know who lives in the flat above or below you. Greenwich has a big sense of community." Karin Tearle lives in Greenwich, next to Greenwich Park, and runs Belle, a fashion boutique in College Approach.

"I love Greenwich. I love the variety, the people - there's quite a few eccentric people here. I've met some very interesting people from all walks of life and they've become my friends," she explains. "That's the part of my job that I love."

However, after almost nine years, Karin has decided to take a break and not to renew her shop lease at the end of this year.

"I'm planning a break for the time being and to see where I go from here." But before that, Karin will be donning a Santa outfit on December 9th to take part in a charity run in Greenwich Park.

"I'm doing the run for the Rwanda Development Trust. I've been a trustee for the charity since 1994 and a voluntary translator and interpretor. I'm also a project co-ordinator, assessing small capacity building projects."

You can support Karin through her sponsorship page Born and bred in Eltham, Linda Cunningham is passionate about Greenwich and its history.

"I love Greenwich for its diversity and its history. I remember when I was working in the post office in Greenwich back in the late 70s, I used to walk along to the naval college gates and gaze through them but could never get in."

Eventually Linda did get in and now she combines her love of Greenwich and of history in her job as a guide at the Old Royal Naval College. But she worries that some of Greenwich's history is being lost:

The historian, who conducted extensive Greenwich research for her Ba(Honours) History, is now setting up her own course for people who want to learn about local history and share their stories too.

It's an eight week course of two hour sessions, to be held inside Discover Greenwich.

"The first hour will be a presentation with me telling the facts as I can ascertain from every source possible. The second half will be about discussion and debate where we can talk about hearsay and things that are maybe less than factual but nevertheless really interesting." "Running the marathon and going through your home town is great but also it was the first time I've raised money for a local charity," recalls Ellie Brown, who raised £1,800 for the St Alfege Restoration Fund at this year's London Marathon.

The running coach and local businesswoman, a Greenwich resident for twenty years, is taking a break from the marathon next year but will continue to teach others how to run with her Greenwich Runners club - the official running club of Greenwich Park.

She says she's seen an increase in people wanting to get active since the Olympics.

"We've set up a running group for beginners and that's very much on the back of the Olympics," she says. "I had a lot of people asking how they could get in to running but didn't know how, so that group has just started and we had twenty at our first session."

Despite the upheaval caused to park runners by the staging of the London 2012 equestrian events in Greenwich Park , Ellie says she was "very much for the Olympics" and thinks the park will eventually look "better than it did before."

"It's looking beautiful and it will be back to its normal self."

Having lived in West London before she moved to the Ashburnham Triangle in Greenwich, I wonder what it is about Greenwich that makes Ellie love it so much.

"What Greenwich has that I haven't found anywhere else in London is the amazing community and it's not just Greenwich. It seeps into Blackheath and it seeps into Deptford and it really is a very strong community, and I think the park acts as a hub for that community. It's very, very special."

Find out about Ellie's Greenwich Runners and her pilates studio. LOCAL film director Carl Medland loves Greenwich so much, he made it the co-star in his first feature film 'The Cost of Love.'

"I love how Greenwich is a backdrop to many films and period dramas, but I feel these films never show Greenwich off as it is today. With The Cost of Love, we have captured contemporary Greenwich - in fact, the whole film is set in Greenwich."

The director, who has called Greenwich home for thirteen years, continues:

"I love Greenwich with all my heart and believe as a gay man it has much appeal in its gay friendly community, not just the gay bars I have seen open and close over the years but also it's about the people and characters that live in the royal borough.

"My film has won Best Feature at an international film festival and has been nominated for Best Film nine times. Whilst touring with the film around the world it’s interesting to hear the comments on the film."

The Cost of Love was nominated for Best Film at a recent film festival where, ironically, it was beaten by Medland's second film, The Adored.

"Despite not winning, the audience commented on the location and how beautiful Greenwich is. This is very common feedback I get at the international festivals. They love the characters and the place; both of which are why I remain living in Greenwich."

The Cost of Love is available from Amazon.co.uk 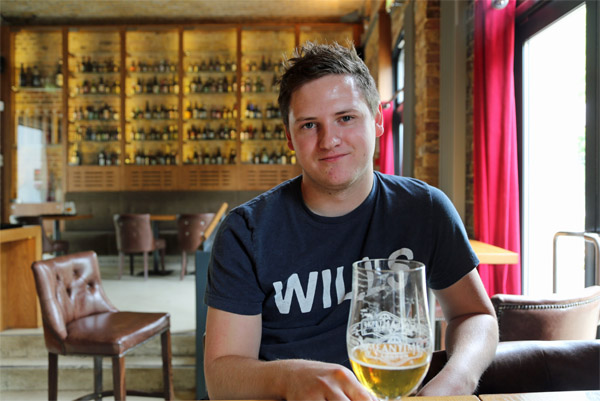 "The decisions and choices that staff are making about what goes in there could miss out some aspects of how it could benefit students, so my aim is to heighten the position of the Students' Union within that building," he says.

Since moving to Greenwich from Corby for his studies, he has become a big fan of the area. "There's something about Greenwich, I'm a big defender of Greenwich. It's green, it's got immense amounts of history and loads of stuff to see. "

And after he's finished his studies? "For as long as I live in London, I'll stay in Greenwich." 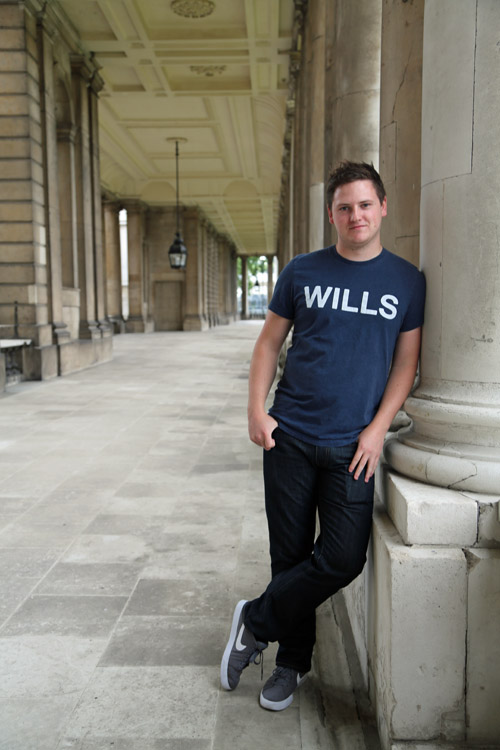 Greenwich People is Greenwich.co.uk's new series of portraits of people that love Greenwich. Mary Mills with the Greenwich Millennium Village in the background

She moved to the borough from Gravesend in 1969 with her late husband, Alan. Both had been involved in the Gravesend Labour Party and got involved in local politics in Greenwich, too.

Following the death of Peninsula councillor Marian Moseley in 1999, Mary stood and was elected at a by-election early in 2000. "I'd been interested in the peninsula for a long time and when I was elected I'd already written a couple of books about it," she says.

"I had been working in local regeneration monitoring and there'd been a long series of meetings with local people going back ten years so [as a councillor] I was talking again to people I'd been involved with in consultation exercises for a very long time."

Dr Mills completed a PhD in the gas industries and works with the Greenwich Industrial History Society. She was one of the first councillors in the borough to embrace the use of blogs and twitter as a way of communicating with residents. 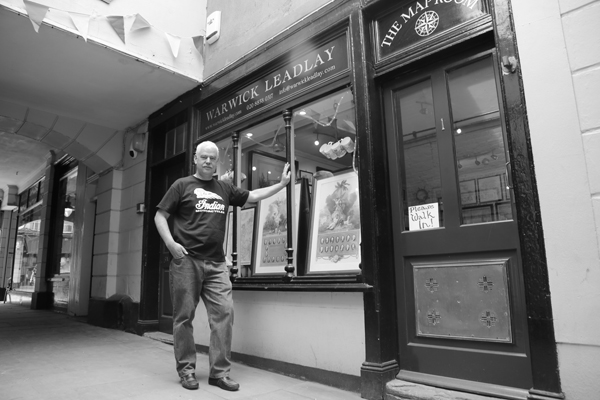 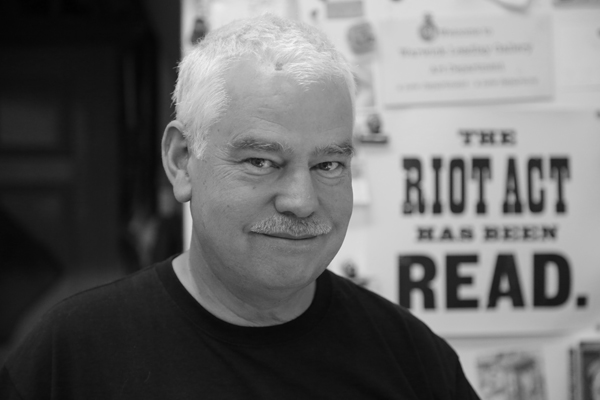 The first in our new series of portraits of local Greenwich characters is Anthony Cross from Warwick Leadlay Gallery. The gallery, set across two shops in Nelson Arcade at the southern entrance to Greenwich Market, specialises in antique maps, prints and fine art, and was founded by Warwick Leadlay in the 1970s.

Anthony, fresh from graduating from York University, was looking to make his way "Whittingdon-like to the bright lights of London." He applied for a position at the gallery in 1978 after seeing a small ad in the Mercury, with the intention of one day "getting a proper job" instead. But he has been at Warwick Leadlay ever since and now owns it as well as managing it.

Anthony lives locally and is also the President of the Greenwich Historical Society. He says of the gallery, "I've always tried to express Greenwich in its many guises and talents."