You are here: Greenwich / Magazine / East Greenwich: The home of communication

How an east Greenwich factory enabled world wide electronic interaction - and how it became the central part of a local network of communication based industries.

In 1999 the ‘Dome’ was nearing completion, with a strong emphasis on electronic technology while ignoring traditional industry. Greenwich was talked up as ‘The home of Time’, and Alcatel, with a factory near the Dome, published a booklet “Greenwich, Centre for Global telecommunications from 1850”. This was never picked up, not even by the local press, and the enormous contribution of local scientists, engineers and workers to the technology on show in the Dome, went unnoticed. 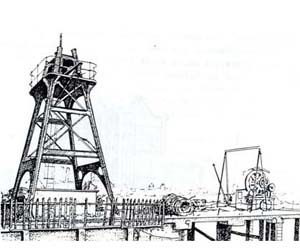 Alcatel were, and are (as Alcatel-Lucent), based on the west bank of the Greenwich Peninsula on a site often known as Enderby Wharf. In 1837 the Enderby Brothers were asked to help in the development of pioneering telegraph cable technology. By the 1850s underwater cables were making possible an increasing pace of international communication and the Greenwich works, by then in other hands, was becoming the main manufacturing base for them.

The heroic story of how a cable was laid across the Atlantic has been told many times. The eventual success was with cable made in Greenwich and laid by Brunel’s vast ship, Great Eastern. I always feel that the really great moment was when, having successfully laid the fourth cable, Great Eastern left Heart’s Content to sail off into the Atlantic and find the parted ends of the third, attempt. No one knew where she was, and there were stories she was lost. On 2nd September 1866 the needles on the instruments at Valentia flickered – the broken cable has been found and mended in mid-Atlantic and, not only did everyone know now where Great Eastern was, but that the world had changed too.

The Greenwich Peninsula factory was to change owners several times, but for most of its history was known as Telcon. However, other local cable making factories were started - Hoopers on the Isle of Dogs, Henley at North Woolwich and Northfleet, Johnson and Phillips in Charlton, Siemens in Woolwich, STC at North Woolwich, BICC at Erith, and so on. Up to the 1920s the Greenwich factory produced the vast majority of underwater cables world wide. - Older local people will still remember the cable ships at Enderby Wharf. The expense of advancing technology brought mergers, and in 1970 STC became the sole British firm in the business, taking over the Greenwich site. Alcatel (itself the result of similar mergers in France) took over in 1994.

These early cables relayed a very limited amount of information using Morse code. By 1924 Telcon, developed a cable system which could transmit 1,500 words per minute. Work continued, and continues, on improving cable. In the 1930s scientists at Telcon were developing polythene – with a trade name of Telcothene - for use in cables. At the same time ‘repeaters’ were developed for amplifying the signals as they travelled through the cable –repeaters are still made at Greenwich today. The last repeaters for use with coaxial cable were made in Greenwich for a system that was laid between the Canary Islands and Spain in 1977.

Recently we have heard about the Nobel Prize awarded to Kao for his work, mainly undertaken in Harlow, on optical fibre technology. Much of the work to build optical fibres into submarine cables took place in Greenwich and the first cables and repeaters using this system were developed in early 1980s; though cable manufacture at Greenwich then ceased – going to STC’s Southampton factory (and later Calais, under Alcatel). The first transatlantic optical system was laid in 1988 with 10,000 telephone channels. Since then development has escalated. Ten years ago Alacatel’s booklet of 1999 boasted that Greenwich based scientists were producing cable which could send 10 million copies of the Daily Telegraph every second, far superior to what could be sent via satellite. Goodness knows what it can do now! We all talk about how global telecommunications are used every day by all us – this is where it began!

Production and development of much telecommunications technology came from South East London – although obviously as companies expanded factories and research centres were built elsewhere. Of the other companies involved the biggest was Siemens based in Woolwich, their site being roughly between the Thames Barrier and the Woolwich Road. They became part of AEI, then GEC, eventually closing in 1968. Looking at photographs of their production lines it comes as a shock to realize that all those telephones we knew and used before the introduction of the mobile were developed and made in Woolwich. Siemens made telecommunications cables but they also made and developed a vast range of enabling devices – oh – and yes they also developed and made telephone exchanges.

When Siemens closed a group of their apprentices and technologists continued to meet. They are now all OAPs and as the Siemens Engineering Society have published an archive document – and an attempt leave some information about what was achieved in Woolwich, which is now lodged at the Greenwich Heritage Centre.

And where else can we find out about Greenwich’s great contributions to the electronics revolution. Well – not locally! The best place is the museum at Porthcurno on the very tip of Cornwall. I would recommend a visit to Valentia, in South West Ireland, for the romance of the transatlantic cable. I am told there is a museum at Heart’s Content, in Nova Scotia. Most of all I feel that local people should know about all this, be proud of it and tell the world. It is after all the skills of all those in the local workforce who developed and made these devices which made this revolution we talk about actually happen.

Mary Mills would like to thank Richard Buchanan for advice and additional information in researching this article.