You are here: Greenwich / News / Give me control of Greenwich’s trains, says Boris at cable car launch London mayor Boris Johnson has called for control of London’s overground rail routes following a power failure which saw hundreds of Greenwich line passengers stranded on a viaduct this morning.

The mayor spoke as he unveiled a £36m sponsorship deal for the cable car between the Greenwich Peninsula and the Royal Docks, which will now be officially called the Emirates Air Line.

But the launch came as Greenwich’s existing transport network was crippled by the closure of the A2 due to a dangerous building at Deptford Bridge, and the failure of the Southeastern train at Deptford.

Passengers were stuck on the train for two-and-a-half hours until it was “rolled” back to Deptford station. London-bound services were diverted via Lewisham throughout the morning.

“The failure on the overground rail is something we could well sort out if only they would give us control,” Mr Johnson told greenwich.co.uk. Transport for London has control of just one of the capital’s mainline operators, London Overground, which was launched by his predecessor Ken Livingstone in 2007.

“It’s a continual bugbear that you have passengers who feel frustrated because their journey into work isn’t comfortable from the south-east. We’re not empire-building, but we just think we could help if we’re involved in those franchises.

“Cable theft is a big problem now and we think that the systems being put in place to protect passengers against disruption are inadequate.

“Frankly, as mayor, I get people asking me about this and I think I need a bit more jurisdiction.”

The £36m, ten-year deal, will see the cable car stations named Emirates Greenwich Peninsula and Emirates Royal Docks, with the 34 gondolas painted in the airline’s red livery. Inside, the seats feature a bus-style moquette.

The service - which will have a capacity of 2,500 people in each direction each hour - will appear on the Tube map, but fares and operating times are still not confirmed. It is due to open next summer, although TfL is not guaranteeing it will be ready for the Olympics.

But the sponsorship cash falls well short of the £59m total budget of a scheme the mayor originally hoped would be entirely funded by private finance. TfL is applying to the European Regional Development Fund for an £8m grant which would “more or less wipe out the construction costs”, Mr Johnson said.

As for the remaining funds, the mayor said most of it was set aside for contingencies that hopefully would not be needed.

“Even in the worst case scenario, there will be a revenue stream from the cable car in terms of fare revenue for TfL which would help to defray that cost very substantially.

“Secondly, there will be further commercial opportunities associated with the base stations, which we will use - retail and so on - and whatever’s left over will represent sensational value for a significant new piece of transport infrastructure.”

The mayor added: “Emirates are one of the most successful airlines in the world - ask yourself why they put £36m into this. I think we’ve got a good deal and they’ve got a good deal. £36m is a good sum to give London a cable car that it needs.”

TfL’s managing director of underground and rail services, Mike Brown, said: “I was on site yesterday and work is well under way - the contractors are doing a great job from what I can see so far. Our plan is to get it up and running next summer, but it was never designed as being critical for the Olympics. But obviously we want to get it in service as soon as we can.

“This is an area of London that’s developing all the time, there are events at ExCeL and at the O2 arena - not just at weekends and in the evenings, but increasingly throughout the day - so we’re very positive about the revenue stream we’ll generate from this.”

Asked if the cable car car was the best priority for Greenwich’s transport problems, Mr Brown said: “TfL is investing a huge amount of money in the delivery of Crossrail, which of course will carry huge volumes of people, many more than the cable car was designed for.

“I think this is a useful addition. It does give us some very useful, specific capacity for the route from Greenwich Peninsula to the Royal Docks, and I think that’s going to be a fantastic addition to TfL’s overall infrastructure.

“But in no way does it distract our energies and efforts from our upgrades to the Tube and investments in the Overground, DLR and trams, as well delivering Crossrail.”

Mr Brown added that the Thames Path by the O2 would reopen “as soon as possible”, when the main piling work by the cable car’s south tower was complete.

The towers are currently being prepared for installation, while over the next few weeks work will start on the stations.

Emirates Airline president Tim Clark said: “As one of the world’s most innovative airlines, this link with this new form or air travel in London is a perfect fit for us. The Emirates Air Line will take off as an iconic landmark for London.”

"Transport for London admit that this sponsorship deal only meets 80% of the construction cost.  This leaves many millions of pounds worth of funding to be found from TfL's budget,” he said.

“At a time when fares are set to rise by well over the rate of inflation people will be asking why the Mayor has failed to live up to what he had promised and ensured the cable car was entirely self financing." 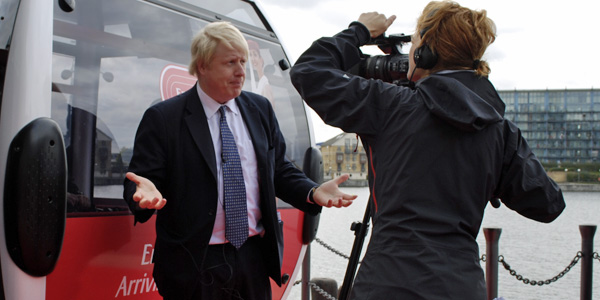