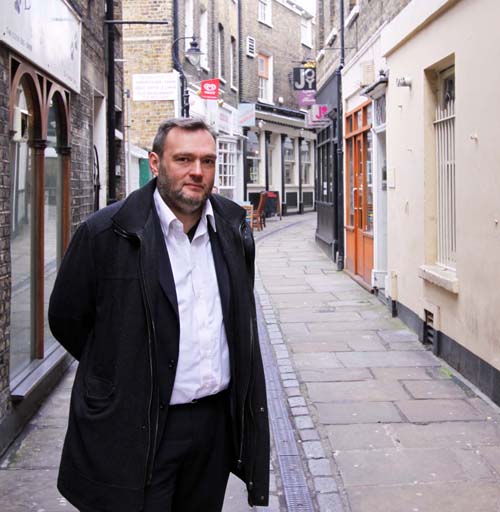 The Conservative's parliamentary candidate for Greenwich and Woolwich has spoken of his "huge disappointment" after the Mayor broke his promise to reinstate tidal flow in the Blackwall Tunnel.

Speaking during a wide-ranging interview with Greenwich.co.uk, the current leader of the Conservatives on the council Spencer Drury said:

"I think it is a huge disappointment because it does create congestion unnecessarily. For years it worked perfectly well and I can’t see why it suddenly had to change."

In the run up to the Mayoral elections, Boris Johnson promised to reverse the controversial decision to end tidal flow "at the earliest opportunity."

The pledge gathered widespread support in the area and formed a major part of his transport manifesto. However, last month he admitted to LBC presenter Nick Ferrari that he would not fulfill his promise:

"If I were to impose my will and say restore that contraflow and if there was then to be some huge conflagration in that tunnel and there were fatalities I'm afraid then under the present law of corporate manslaughter brought in by this Labour government then the tragedy is that I would be liable."

"I’m not aware of the legal position so I will have to take [Boris's] word for that, but yes it is a disappointment."

The importance of relieving congestion at Blackwall was highlighted after a recent fire in the tunnel caused widespread traffic chaos in the area. It also comes after reports that Olympic lanes will be installed in the tunnels.

However, on this issue Spencer Drury insists that the Mayor has listened:

"We’ve spoken with the Mayor’s office and they have said that this is not the case, so I don’t believe that the plan that we have seen in the public domain is the plan that we are going to end up with. I think the Mayor is listening to us on this."

He also hit out at Greenwich Council for failing to deal with congestion in the area:

"I have always said that one of the things that you could have as a legacy from the Olympics is sorting out congestion in Greenwich, that we could get outside organisations involved and say that we want this as a legacy and I think that many more residents would be on board about the Olympics if it meant we could sort out the town centre."

However, he suggested that the council's plans to pedestrianise the town centre were little more than an election gimmick:

"If you were cynical about it you might suggest that it is just because there is an election coming up because there doesn’t appear to have been a proper plan behind this. The problem is that they haven’t done a study on the surrounding areas. This is a huge hub within SE London and the impact the plans would have on Lewisham and on Deptford and on the A2 is even bigger. And because the Council have not looked at it on a global scale we might have a situation where it would work for one part of Greenwich but then has a negative effect elsewhere."

He believes that the council should instead secure funding to widen certain roads in the borough and even to build a road tunnel under Blackheath:

"Well one of my colleagues was very keen on taking one the road across the heath down into a tunnel because you could dig down very easily there and make it wider. I think that would be a lovely idea although I don’t know whether we would ever be able to afford it. But quite clearly if we want to look after our town centre we have to look at something that would be a genuine leagacy from the Olympics"

In part two of our interview Spencer Drury speaks out against plans to build a temporary stadium in Greenwich Park, says that the continued publication of Greenwich Time is "morally wrong" and claims that Chris Roberts is a "divisive" and unpopular leader of the council.

It's tunnel week in Greenwich. Many people are just finding out about Transport for London's plans to close the Blackwall Tunnel to all southbound traffic between 9pm and 5am, five days a week, for the next three years.

We are already half-way through the last uninterrupted week there'll be until 2013. The closures start this coming Monday and the tunnel will henceforward be closed southbound after 9pm every night except Friday and Saturday.

Anger is whipping round the web. A meeting has been called on February 12 (see this Facebook site) to discuss some form of protest. As someone on the site says, "the bloke in Shawshank Redemption didn't take that long to sort his tunnel."

Does it really take 6,240 hours to fit "new safety, lighting and communications systems"? Surely not. Couldn't they keep both directions open by having a contraflow in the remaining bore, without HGVs if they're worried about a collision? Of course they could, but they won't.

Boris Johnson told me a couple of weeks ago that his TfL officers simply refused point-blank to implement his election manifesto commitment to restore the old tidal flow arrangement in the tunnel during rush hours. They claimed that it was not safe. The contraflow during closure has no doubt been scuppered on the same pretext, even though that too was the preferred solution during tunnel works for many years.

Safety seems unlikely to be TfL's main motivation, since it was perfectly happy to allow contraflows for many years and since, as far as I know, no serious accident ever occurred. Nor was the ending of the arrangement the result of any considered or empirically studied process - it was just stopped one day, and that was that. The main reason is that it is another part of "Transport for Livingstone's" historic and continuing jihad against the motorist.

You should be going by Tube instead, scum! No, hold on - the Jubilee Line's closed quite a lot of the time too, isn't it? Oh well, you'd better cycle then, through the foot tunnel. Not a chance, buster. That, too, will be closed at night (and possibly during the day) for months this year and next as Greenwich Council carries out yet another tiresome, unnecessary and frankly offensive piece of Olympic-related window-dressing.

We still don't have a clear timetable for the closures, although we've been demanding one for months. But, in the second tunnel-related story of the week, the plans for the refurb have been published - so we do have an idea of what the all-singing, all-dancing, refurbished tunnels are going to look like.

"Our approach to the new installations has been bold," say the designers, "meeting our clients' challenge to bring the tunnels into the 21st century." The design, they say, "aims at a 'supermodern' aesthetic... a contemporary aesthetic that acts as a counterpart to the old" and will make "use of the tunnels an event in itself." Oh, God.

One of the nicest things, I think, about the foot tunnels is that they are not supermodern or contemporary - but a little breath of Edwardian Britain, from the unflashy white tiling to the wood-panelled lifts.

The lift panelling will be kept, it turns out, but will be placed behind glass screens on stainless steel fixings, with a stainless steel railing round the car at waist height and "LED feature lighting to highlight the panelling." All the hallmarks, in other words, of the 538 other clueless, over-buffed heritage sterilifications there have been in London over the last ten years.

The glass panels in the domes on at either end will be stripped out and replaced with... almost identical glass panels, only these ones (wait for it), these ones will be aligned "in clearer association with the meridian, with each segment representing 30 minutes of the time dial."

The claimed objectives of the refurb include "improved safety" and a "more welcoming environment." This will no doubt be why those dreary heritage features so totally irrelevant to safety and welcoming, the lift attendants, are to be scrapped. As the document admits, "the lift cars will no longer be manned."

At tunnel level, the tiling stays, but there is a "central services spine... designed to emanate a serene glow." The lighting will "allow colour and animation to be subtly manipulated to create different moods at different times of the day," will "wash a feature colour on the walls," and will provide "the infrastructure for contemporary art installations so that the tunnels can contribute to cultural life in the locality." The brochure is full of lower-case, marketing-man's promises about "invitation, exploration and exhilaration."

Let us pause briefly here, to collect our thoughts and grind our teeth. Since this scheme was announced, life in Britain has changed. The country faces a public spending deficit of £175 billion; a deficit that will require painful cuts to things we actually value. Does anyone really think that, in this new Britain, spending £11.5 million to damage the aesthetic of the tunnels, get rid of the staff and install "mood lighting" should be a priority?

The tunnel is not a "cultural installation," but a transport one, a job (subject to simple mechanical repairs of the lifts) that it does pretty well at the moment. As for my "mood," it would be much improved if basic infrastructure was just allowed to carry on doing its job. I do not want my use of the tunnels to be an "an event in itself," particularly since the most regular event over the next two years will be closure. You want to see "exhilaration?" Scrap this idiotic scheme, and all the other woeful 2012 nonsense. Stop meddling, and just leave us alone.

The Blackwall Tunnel has been closed northbound and is not expected to reopen until Wednesday after a vehicle fire yesterday.

The incident happened on Sunday at around 17.45 and  two people were taken to hospital - one due to smoke inhalation and one with an ankle injury.

Transport for London say that the road surface, lighting and CCTV systems were damaged in the fire and TFL engineers are working 24 hours a day to repair the damage.

The closure of the northbound tunnel has caused gridlock on surrounding roads, with motorists advised to use the Dartford river crossing, Rotherhithe Tunnel, Woolwich Ferry or Tower Bridge to cross the Thames.

Greenwich Council responded to the closure by saying that it underlined the need for additional river crossings.

Cllr Peter Brooks, Deputy Leader of the Council, said, “The travel difficulties experienced this morning – and which are forecast to last at two more days – starkly underline the dangers for Londoners of relying so heavily on the Blackwall Tunnel.

“Greenwich Council has consistently pressed for a package of further river crossings, to relieve the pressure on the crossing at Blackwall, which is why we were extremely disappointed at the decision of the Mayor of London to scrap plans for the Thames Gateway crossing.

“We are continuing to press the Mayor to put the Thames Gateway crossing – together with a new crossing at Silvertown – firmly back on the agenda.”

UPDATE: The Blackwall tunnel reopened tonight after TfL engineers worked quickly to repair fire damage, well ahead of the initial estimate that it wouldn't reopen until Wednesday.

Garrett Emmerson, Chief Operating Officer, London Streets, said: 'I would like to pay tribute to the tireless work of the emergency services, tunnel engineers and many others who have ensured we have been able to reopen the tunnel so quickly.