I was struck by a comment from a reader called Paul on last week's column about Greenwich Market, and think it deserves a wider circulation. He wrote of the danger that in the run-up to that longed-for event of which we all dream, the Olympics, Greenwich will become little more than a series of building sites.

As well as the market, there's the Olympic development in Greenwich Park, the Ofer Wing of the Maritime Museum (which will also affect the park), the foot tunnel, the old Village Market site, the new pier, the Cutty Sark, Greenwich Reach. As Paul says, "no tourist will want to walk around a load of building sites for the next three years and it won't be long before word gets out that Greenwich is closed. In the rush to celebrate the Olympics fortnight, it seems that a long-term overview has been thrown out of the window."

There are plenty of places that are unattractive, provide inadequate public amenities and need lots of work doing to them. But Greenwich isn't one of them. I think (I'm biased, of course) that it's one of the nicest areas in London. It just doesn't need "regeneration," especially not the airport-terminal kind that awaits us in the market.

So why has everyone suddenly, it seems, decided that what Greenwich needs is a complete rebuild - all at once? As Paul suggests, the Olympics must have something to do with it. One of the worst things about the Games is the way that a single fortnight has come to dominate, even monopolise, official thinking, as if it is somehow more important than all the months and years which go before it and after it.

It isn't, of course. The Olympics will be with us for two weeks. The new market could be with us for a century. But the way it's looking, the priorities of the two weeks will mean that the project for the century is rushed through the planning process without proper scrutiny, then thrown up in months - and is, as a result, far worse than it should be.

We need to stop. We need to take our time. We need to tell ourselves that in the long run, the Olympics simply do not matter. Within months of the closing ceremony, they will be all but forgotten by almost everyone. The market, however, will be in our faces for decades. The short-term goal of a shiny Olympic fortnight is not remotely a good enough reason to compromise Greenwich's long-term future.

We need to tell ourselves that even during the fortnight, the Greenwich end of the Olympics will not matter. The centre of attention will be on the athletics and the swimming, seven miles to the north. The horse events will get half an hour on TV. There won't be many Olympic-related visitors to Greenwich - they'll all be heading for Stratford. Greenwich Council may want to put on a show, but not many people will be coming.

Building white elephants at Stratford is bad enough. But at least some people will want to see them, and they will be safely out of sight of the rest of us. Building white elephants in the middle of a successful town centre is far worse - and the error is compounded by the fact that not many of the people the "improvements" are supposed to attract will even be interested.

PS: I forgot to give the address for objections to the market planning application last week. Emails should be sent to david.gittens@greenwich.gov.uk, quoting reference numbers 09/0829/F and 09/0830/C. Gittens' postal address is Crown Building, 48 Woolwich New Roas, SE18 6HQ.

Pictures of the proposed extension to the National Maritime Musuem have been unveiled. Designed by architects, C. F. Møller, the extension will house a large gallery for special exhibitions, as well as a new cafe and restaurant. The designers say that the introduction of a new east-west pedestrian route will bring the NMM into a "seamless integration with Greenwich Park". Much of the new space will be below ground, and its roof will become a terrace overlooking the park. 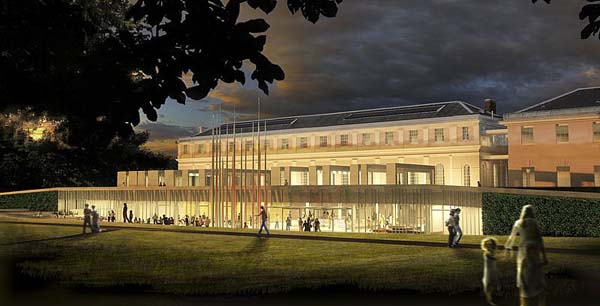 The new wing has been made possible with a large donation by shipping magnate, Sammy Ofer, who also stepped in to help with funds for the Cutty Sark.

The Evening Standard has labelled the new wing a "toast rack" but that do you think of the new design?

I wasn't planning to run any more snow pictures this week, but then Stephen sent me a batch of gorgeous photos taken in Greenwich Park this week, so I thought I'd share a couple here and save the rest for when the snow is but a distant memory. 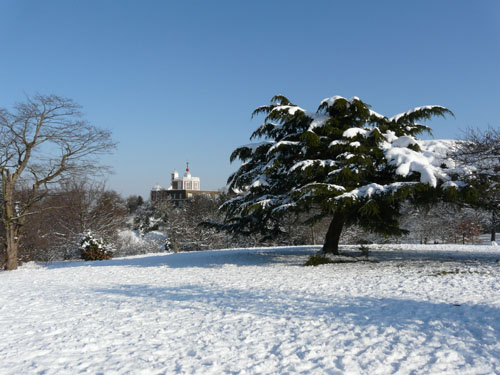 Wow, stunning blue sky and that cold white floor below. 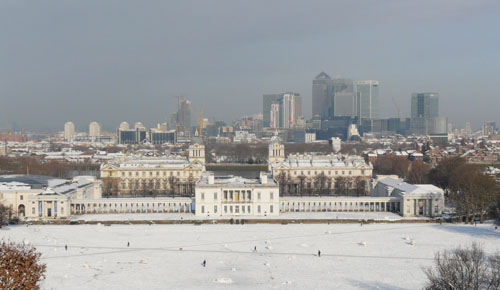 One of the best views in London, but with a dusting of snow added.

Thanks Stephen, for sharing your excellent pictures.

Thanks to Abe for the heads up on this one...

Britain's National Maritime Museum announced today that it is to host the new 2010 Greenwich Horse Trials. A Museum spokesman explained: "This is a key initiative in our strategy to attract a wider audience, and will serve as an important dry run for our hosting the Equestrian Events of the 2012 Olympic Games. A great deal of management time has gone into planning this new event which maps directly onto the DCMS core objective of increasing and broadening the impact of culture and sport. Given the magnificent effort so far from all our staff, I am confident the event will be a great success."

A new book titled "500 Places to See Before They Disappear" has listed the National Maritime Museum as a visitor attraction worth seeing before it's destroyed by climate change.  The sensationalist claim from author Holly Hughes urges readers to visit the museum and other London landmarks such as the Tower of London before they are lost forever, with rising water levels and sinking land fingered as the likely culprits.

A representative of Visit London suggested that the Thames Barrier will be protecting the apparently under threat attractios for generations to come - Read more on the BBC website.

The shortlists for the Visit London 2008 Awards have been announced, with Greenwich beig well represented in a number of categories. The Royal Observatory Greenwich is nominated for "Best Tourism Experience", the National Maritime Musuem is up for "Visitor Attraction of the Year" and the O2 is nominated in several categories including, "Sports Tourism Award", "Sustainable Tourism Award" and "Accessible Award".

The Visit London 2008 Awards ceremony will take place on November 27th at the Royal Albert Hall.

This coming saturday - August 23rd - the National Maritime Museum plays host to International Day for the Remembrance of the Slave Trade and its Abolition 2008.  The day promises to be packed with events exploring cultural legacies from the history of transatlantic slavery. Events include a theatre workshop, jazz and hip hop workshops and performances and "Sea of Voices" - a participatory singing event that everyone can join in.