The King's Troop arrived at Woolwich Barracks last night and this morning they paraded through Woolwich while onlookers waved flags and cheered. 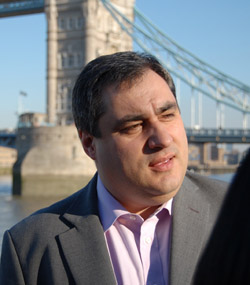 We're sitting in City Hall, and talking about the town downriver where he lives. The son of two generations of artillery gunners, Duvall was born and raised near the Arsenal and grew up as industry in the area drifted away.

“It’s a place I know well,” he tells me. “I used to hop along the embankment there and play in what was one of the biggest adventure playgrounds going, the ex-Arsenal site.”

Eventually Len’s playground made way for the concrete high rises of modern Thamesmead. Designed for the car, no railways were ever built into its plans and many of the town’s roads did not even have pavements beside them. So while older, more connected parts of the city were able to survive the loss of heavy industry, this new train-free part of town was isolated and vulnerable from the start.

“Of course there is a problem with isolation there.” Duvall admits “But it has always taken more to create a job in the South East generally than anywhere else in London and the reason for that is transport. South East London has always been the Cinderella of transport and that’s why we’ve had to fight for what we’ve got.”

While it's true to say that the town centre and the Peninsula have benefited from the links brought by the DLR and the Jubilee Line, other parts of the borough have arguably been left behind.

“Look, I live in Woolwich and I don’t want it to be the poorer cousin of the rest of the borough” he insists “but getting what we have got hasn’t been a given. We’ve had to fight for every bit of it and I’ve still got the scars from that.”

For Duvall those fights have led to the recent opening of the new DLR station at Woolwich and to the promise of Crossrail to come. But while these developments will undoubtedly boost some parts of the borough, other parts will not necessarily get their share of the growth,

“Of course it was inevitable that the development at the Dome and the Peninsula would draw resources into it,” he says.

“But if you want any kind of extra infrastructure you have to advocate for it, and I don’t think Boris quite gets that.”

He’s talking now about the Thames Gateway Bridge. The crossing, which would have linked Thamesmead to North London, was supported by four of the five borough councils directly affected. However, with the planning inspector, green campaigners and Bexley council all opposed to it, Boris decided to pull out. The decision has left Duvall and Greenwich Council angry:

“I think that what Boris did in cancelling the Thames Gateway Bridge was criminal”  he says.

“There was a lot of support for the bridge, but there were two or three roads in Bexley which were opposed to it. Boris could have dealt with those issues but he didn’t face up to it. And you know one of the defining things about being a leader is being able to say no to your mates and so far Boris just hasn’t been able to do that. ”

Yet Len is otherwise warm in his praise for the Mayor. He says that unlike some he “never believed the stuff about him being a racist toff” and tells me how impressed he has been with his work rate.

“He’s definitely hard working,” he says. “I’m not sure he started out like that and I think that was one of the criticisms against him, that he was ‘lazy Boris’ but he’s certainly putting the hours in now.”

Despite this praise, his relationship with Boris has not been an easy one. Appointed by Ken Livingstone to chair the Police Authority,  Len’s position was handed over to Boris Johnson last year. Following his now famous intervention in the Damian Green case, Boris and Len very publicly came to blows. The result of these exchanges, was an official complaint made by Duvall to the Standards committee.

This complaint, which has caused Len to come under criticism himself, is still under investigation.  But despite this ongoing controversy, he insists that they remain on good terms.

“The thing about Boris, is that he always wants to be liked” he says laughing.

For now though, Duvall's main task is in representing his constituency. And in the run-up to the Olympics, what happens in the borough is increasingly coming into the public eye. I ask him whether he thinks people are right to be worried about the Olympics.

“Of course there are legitimate issues about having the Olympics at Greenwich Park and I think the Council need to work harder at addressing those.”

“But I think some of those have to be challenged. And the issue is that Greenwich Park isn’t just for Greenwich residents. It’s a London-wide park, it’s a Royal Park, and it’s an international park.”

I ask him what he thinks about the press coverage that the issue has received so far.

“I think we have to be careful about having an Andrew Gilligan knee-jerk reaction to it” he says, referring to articles in the Evening Standard and elsewhere. “Because if you look at where it happened in Hong Kong, there was disruption but now the site is back in action.”

“And look, I don’t live in Greenwich, but I use the park a lot and the last thing that I want to do is to wreck it. Politicians don't get up wanting to make things worse for people.”

As I gather my things together, I turn and take a look at the pictures on his office walls. Among the campaign posters for the Labour party and the Anti Nazi League is a framed picture of Greenwich and the Thames Waterfront.

For those of us living in the borough, this is just the everyday view of our ‘manor’, but for the rest of the world it will become one of the major views of the UK.

Quite what having it as a backdrop will mean for the flower beds of Greenwich Park remains to be seen.  But beyond their margins lies a wider borough far more in need of Duvall's attention and care.

TFL'S plan for a new "Greenwich Waterfront Transit" sounds like it should be rather good. A tram, perhaps? A river service of some kind? Surely a guided busway, at least?

Actually, I'm afraid, it's complete rubbish. Despite the name, intended to make it seem like something special, it is simply a normal bus service - using normal diesel buses - from North Greenwich Tube station, via Woolwich, to Thamesmead and Abbey Wood. It won't even give us any more trips - it will simply replace the existing 472 route, at precisely the same frequency.

There's no doubt that Woolwich and Thamesmead need new transport links. But the only new things this will bring are a short stretch - around half a mile - of bus-only road in Thamesmead and a little diversion away from the existing 472 route to serve the Royal Arsenal development at Woolwich. For the rest of its route, it will run on the same roads as the existing bus routes do now.

In fact, the only thing remotely special about the "Greenwich Waterfront Transit" is the price - an eye-watering £20 million for just over five miles, plus operating costs of around £1 million a year, making it probably the most expensive bus route in the history of the world.

Even one of the claimed benefits of the route, the Royal Arsenal diversion, is being fiercely resisted by some residents. The development's main thoroughfare, Number One Street, currently an attractive, pedestrianised boulevard leading down from the Arsenal's main gateway, past the Firepower museum and other heritage buildings, to the river and pier, will be ripped up and turned into part of the bus route.

Jamie Milton, one Royal Arsenal resident, has organised a campaign and a petition against the move: it and another petition currently have around 500 residents' signatures, a very substantial proportion of the development. "Number One Street is the only full-time pedestrianised area in Woolwich and is home to two listed buildings, the Royal Brass Foundry and the first-ever Royal Military Academy," he says. "We are understandably up in arms about this."

TfL says the route along Number One Street was chosen after an "extensive public consultation," three words to send a shiver down any spine. In fact, says Milton, the consultation, in 2005, attracted just 27 responses from the entire Royal Arsenal development (perhaps not surprising, since it was still being built at the time). Of those 27, just 11 supported the bus route going down Number One Street!

Even our local Labour MP, Nick Raynsford, not known for his opposition to costly vanity schemes (he's a fervent supporter of the Greenwich Park Olympics) can't see the point of this one.

"I supported the original transit scheme as it offered the prospect of a convenient and rapid transport system from Thamesmead and Woolwich to North Greenwich," he says. "However, as the scheme has been progressively watered down to what is now little more than a glorified 472 bus, its benefits have been seriously eroded. Bearing in mind the opposition of many residents in the Royal Arsenal to the current route through the Arsenal, I no longer consider it justifying the substantial costs involved."

It had been hoped that the GWT would be a candidate for Boris Johnson's bonfire of the vanity projects, his new transport strategy. Well, some other worthless Greenwich-area extravagances, such as the new £500 million Thames Gateway bridge, were laid to rest when the strategy was published last week. Later, unfunded phases of the GWT have also been canned.

But although there could still be scope for some route changes and cost cutting - no planning application has yet been submitted, and by now it should have been - it is looking like the first phase, the North Greenwich- Thamesmead - Abbey Wood route I describe, will go ahead.