THE KING'S Troop Royal Horse Artillery has received its annual inspection at the Royal Artillery Barracks in Woolwich.

The Troop, which moved to Woolwich from St John's Wood in 2012, formed up in the Parade Ground in front of the 18th century barracks this morning shortly after 9am.

With a stirring musical accompaniment from the Royal Artillery Band, making a rare return to Woolwich since leaving the town in 2014, the Royal Horse Artillery was inspected and 'declared fit to represent the nation.'

After the inspection, the Troop moved on to Barrack Field where they performed a Musical Drive and fired six guns for a crowd of spectators which included local school children.

It's the first time the King's Troop has received the annual inspection in Woolwich since their move to south-east London. They had continued to use Regent's Park until last year's event which was held in Charlton Park. 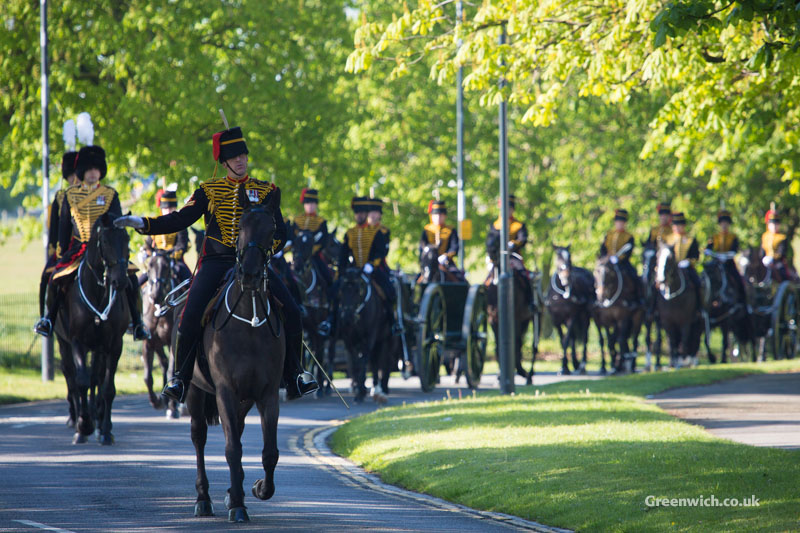 The Troop made the short journey from the purpose-built facility at King George VI lines along Repository Road. 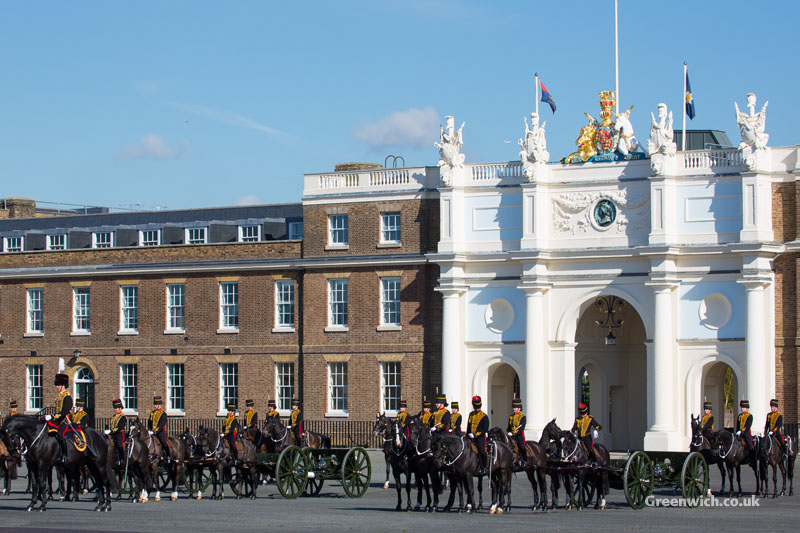 The Royal Artillery Barracks provides a stunning backdrop to the inspection. At 329 metres in length, it is thought to be the longest Georgian frontage in Europe. 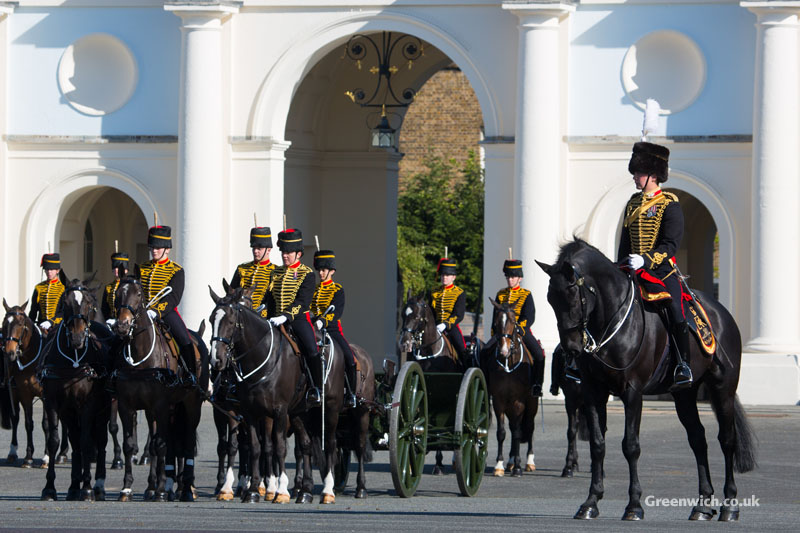 The Troop formed up shortly after 9am this morning. 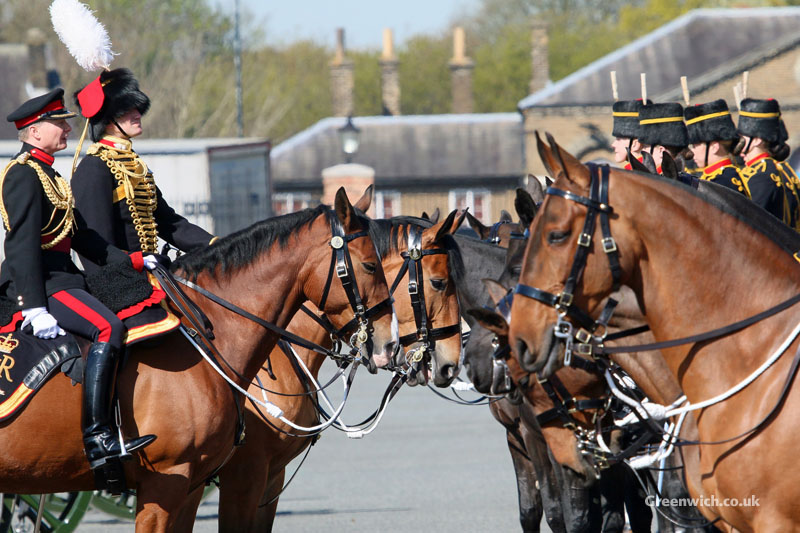 The inspection found the Troop "fit to represent the nation" 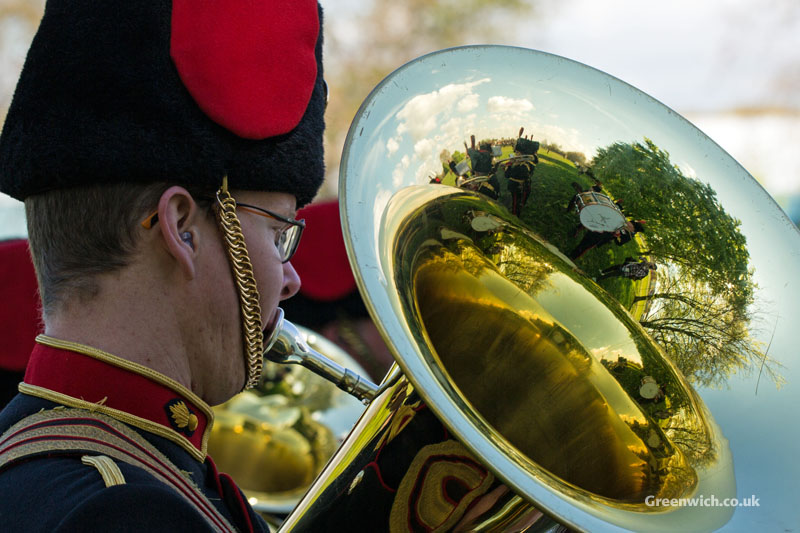 The Royal Artillery Band attended the Inspection - they left Woolwich in 2014 after a 250 year association with the town. 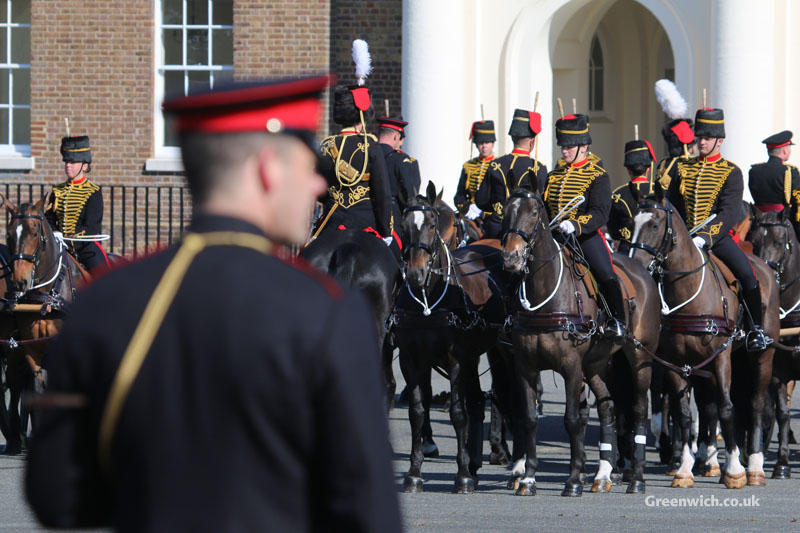 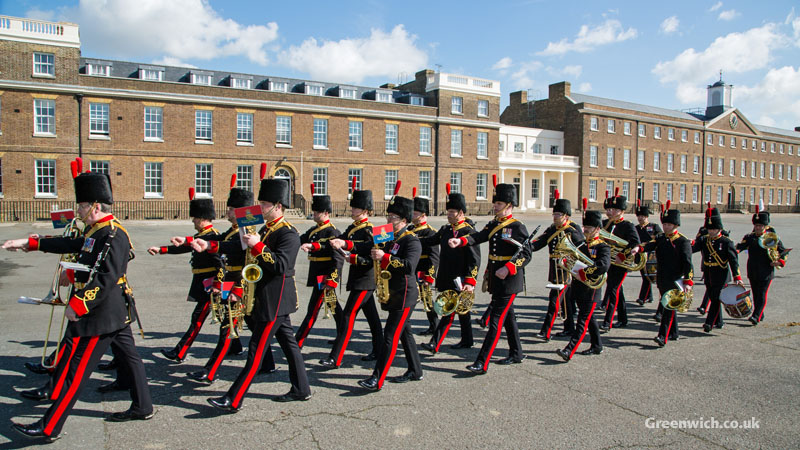 The Royal Artillery Band march out of the Parade Ground and on to the Barrack Field. 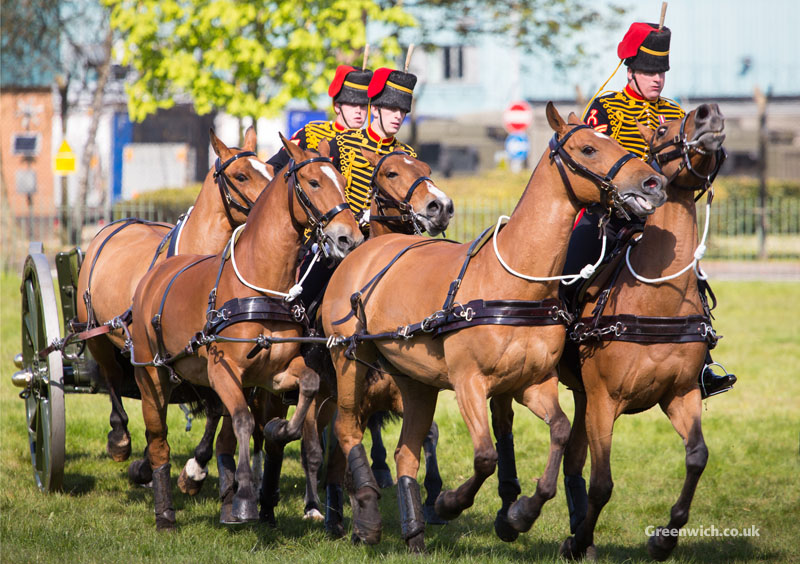 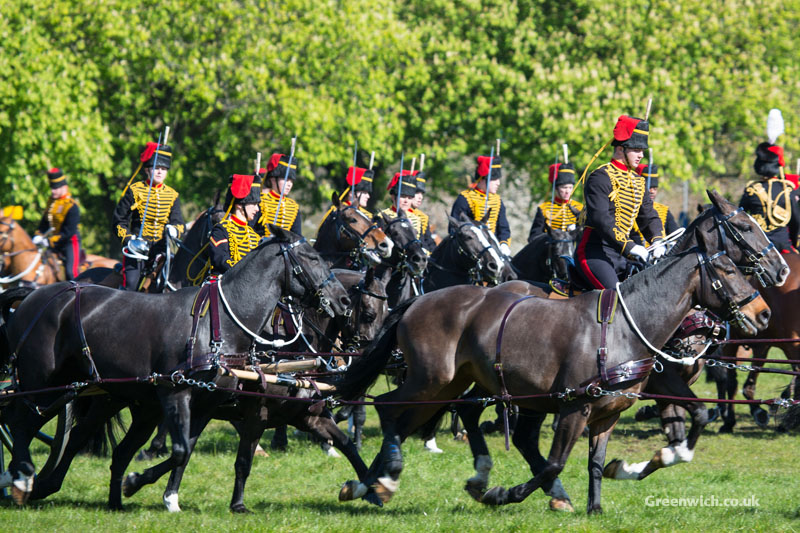 The next major event for the King's Troop will be a Royal Salute in Green Park for the State Opening of Parliament on May 18th. 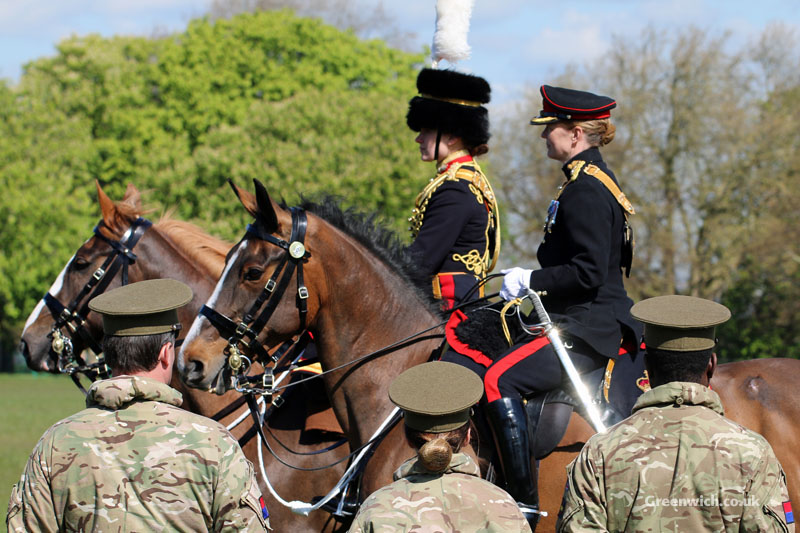 A sword glistens in the sunshine this morning. 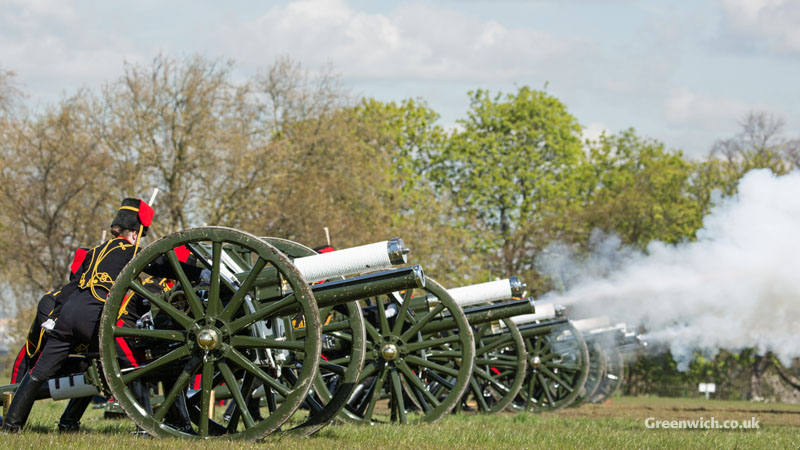 Six guns were fired by the Troop, bringing the demonstration to a close before they returned to the King George VI Lines.

The changing view from Greenwich Park looking towards the Isle of Dogs is well noted as new towers continue to spring up around Canary Wharf. But wandering through the park the other day, I noticed that the view looking towards the Dome has also substantially altered. I took a photo and by luck found one in my archives which roughly corresponded to it so have been able to create this animated GIF which illustrates some of the changes to that part of Greenwich over the past eight years. END_OF_DOCUMENT_TOKEN_TO_BE_REPLACED 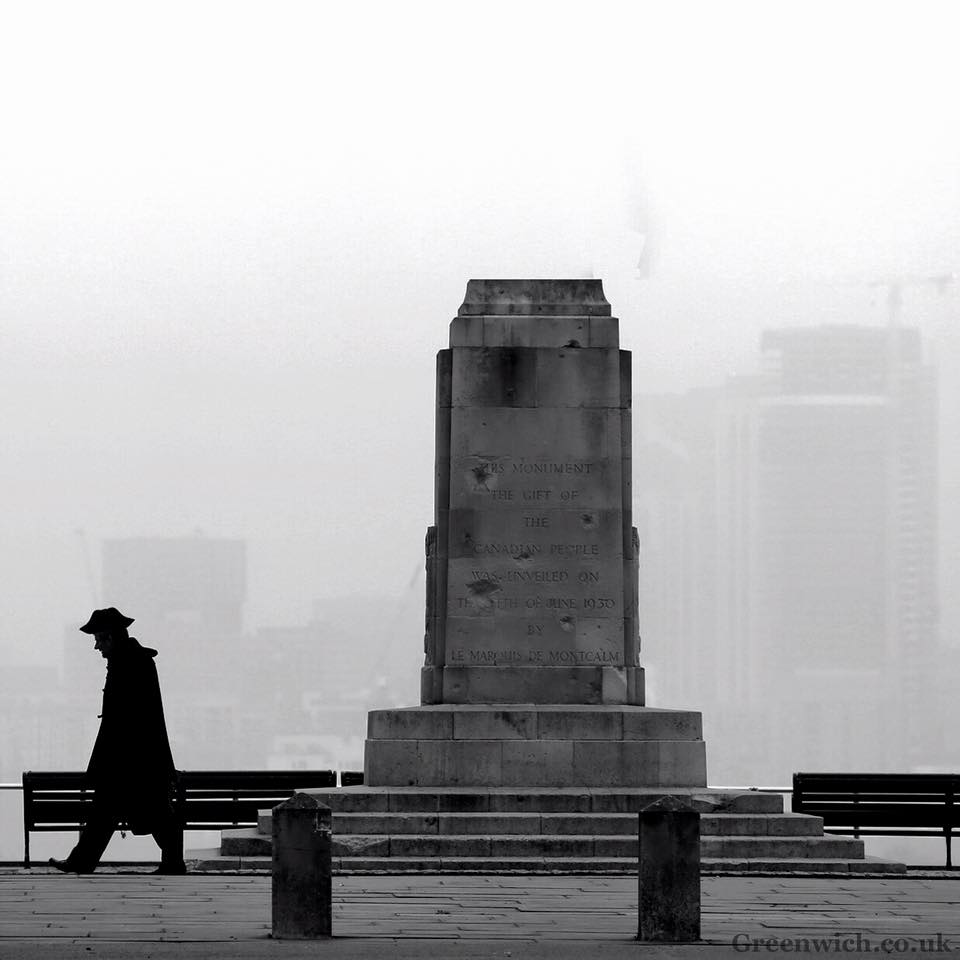 A rare sighting today of General Wolfe stretching his legs with a morning walk around Greenwich Park.

Against a backdrop of simmering unrest, Charlton's injury-hit squad served touching notice that "their spirits have been bruised... never broken" by mounting a lively second half comeback against Nottingham Forest. And the crowds who congregated in protest outside The Valley's main reception area before and after this somewhat sidetracked game made good their pledge to "back the team not the regime". They stood firm behind this group of beleaguered players, saluted their effort, then turned their attention to the most important item of business on a sour them-and-us agenda.

Treated like beggars at the rich man's gate, the rank-and-file gathered in noisy dissent, running through an extensive repertoire of songs and chants, most of them repeatable, some of them not for publication, several boasting newly inspired lyrics. Predictably they were all but ignored by the inner sanctum of VIPs, who were grateful, no doubt, for the wet weather that precluded the threatened sit-in. But the rebels refused to disperse until their point had been made, that point being that a club they considered their own was being led into possible extinction by an absentee owner to whom Charlton Athletic represented no more than a set of entries on a profit-and-loss sheet. Hunkered down in his Brussels bunker, Roland Duchatelet was unavailable for comment. You'd get more comment from a Trappist monk than the reticent Roland.

Left to convey rare messages from her boss, most of them like-it-or-lump it nuggets of diplomacy, CEO Katrien Miere has a thankless task. Possibly wisely, she declined the opportunity to address the rabble in a charismatic Eva Peron-styled attempt to win them over. No offers of cake and ale were made, no promises of reform on the General's behalf. A mob was forming in the plaza and establishment heads were being kept below the ramparts. There was to be no balcony appearance on this lowering, bleak evening. Do your own dirty work, Juan, she was heard to murmur, this lot's being led by Che Guevara. And we all know which one he is, right?

But back to the football, which at least provided a crumb of comfort. Down 1-0 to ordinary Forest, the Addicks fought back to equalise in the 70th minute, survived the dismissal of substitute Tareiq Holmes-Dennis and came within a whisker of snatching all three points when the impressive Callum Harriott, prudently called back from his loan spell at Colchester, forced a spectacular save off Dorus De Vries' fingertips with a jet-powered rocket from 25 yards.

It was rousing stuff which banished memories of a first half combining tedium and frustration. Once again Charlton were neither better nor worse than mediocre opposition, who matched their dross and drudgery.

Attempts on goal were mutually non-existent and there was more edge at the Nell Gwynn tea rooms until, almost inevitably, the visitors scored in the last minute. Surprisingly, Ben Osborn's 18-yard strike, brilliantly bent away from Stephen Henderson's reach into the top right corner, stood out sharply in this dreary context. A resigned crowd could hardly summon the energy to complain. The abuse aimed at "head coach" Karel Fraeye was almost halfhearted. It wasn't entirely his fault, anyway.

Taking over from the invisible El-Hadji Ba for the second half, Johann Berg Gudmundsson injected immediate pace and purpose. It was, however, the indefatigable Jordan Cousins, still surprisingly only 21, who drove Charlton on. Always prepared to sacrifice his ego to the the team's welfare, the local lad covered, tackled and prompted with manic intensity. The power header which soared over Forest's central defence and was toed goalward by Simon Makienok, typified his all-out effort. Shame DeVries reacted instinctively to turn the improvised shot to safety.

Relishing his rebirth as an Addick, meanwhile, Harriott was busy justifying his second chance. After Harry Lennon's fine last ditch tackle foiled Ryan Mendes and Henderson saved smartly from Nelson Oliveira, the winger produced a moment of inspiration which led to parity. Following another driving run by Cousins, his delicately delivered ball from the left flank curled behind Matt Mills and this time Makienot's lanky leg extended just enough to turn a richly deserved equaliser past DeVries and in off the right post. Maybe this relegation battle ain't quite as cut and dried as we thought, after all.

There was still time for Harriott to sting the DeVries' palms with an impossibly angled rocket before detonating the last gasp volley, to which the Dutch keeper reacted superbly. Despite their numerical disadvantage, Charlton had finished more strongly and can draw heart from their improvement.

Whether the same can be said of their frustrated fanbase is debatable. Management's reluctance to engage them in reasonable conversation might well return to haunt them because if you refuse to learn from history, you're doomed to repeat its mistakes, isn't that what they say? A glance through "Battle for the Valley" could alert them to what they're up against. Its author is still around. In fact, he's very much around. Cojones? Made of steel. Backbone? Ramrod straight. Nerve? Unwavering to date. But always ready to talk. It's revolutionary but could be worth a try, Katrien. 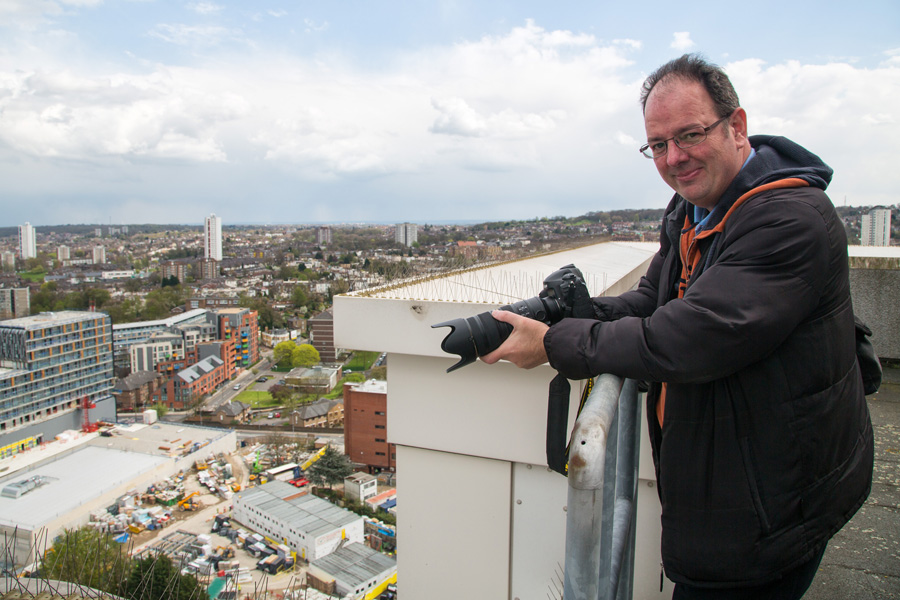 Mike King was a rather exceptional human being. I first met him early in 2012 in Greenwich Park where he was photographing the start of a cycling event and was soon struck by the sweet nature of this tall, smiling man with a couple of Nikon DSLRs around his neck.

I like to think we became good friends quickly and over the next couple of years it was a great honour to spend time with this gentle man. He was naturally modest but his achievements were many, having covered Olympic games, World Cups and other major events to create a stunning body of work, first as a staff sports photographer on Fleet St and latterly a freelancer. END_OF_DOCUMENT_TOKEN_TO_BE_REPLACED 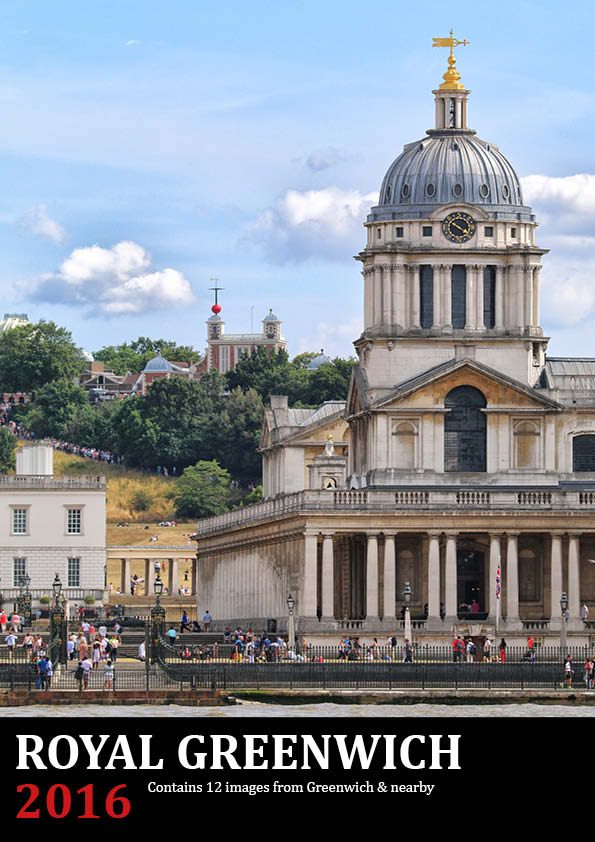 THE 2016 edition of the Royal Greenwich calendar is now on sale, online and in local shops.

It's the fourth time that Greenwich.co.uk has produced a photo calendar using images from Greenwich and nearby.

This new calendar has sought to capture some wonderful moments such as a seal on the foreshore, a hippo (!) passing Greenwich, a Royal Navy ship passing the Thames Barrier and dozens of hot air balloons floating over Blackheath - a photo provided by Stu Mayhew.

There's also classic shots of Greenwich throughout the seasons with the cherry blossom of spring in April, autumn leaves in October and a snowy, wintry scene for December.

The price of the Royal Greenwich 2016 calendar is £6.99. If purchased online, postage and packing is £1.80 or free if two copies are bought. The calendar is already available in a range of local retailers with more being added soon.

Or find it in the following stockists: 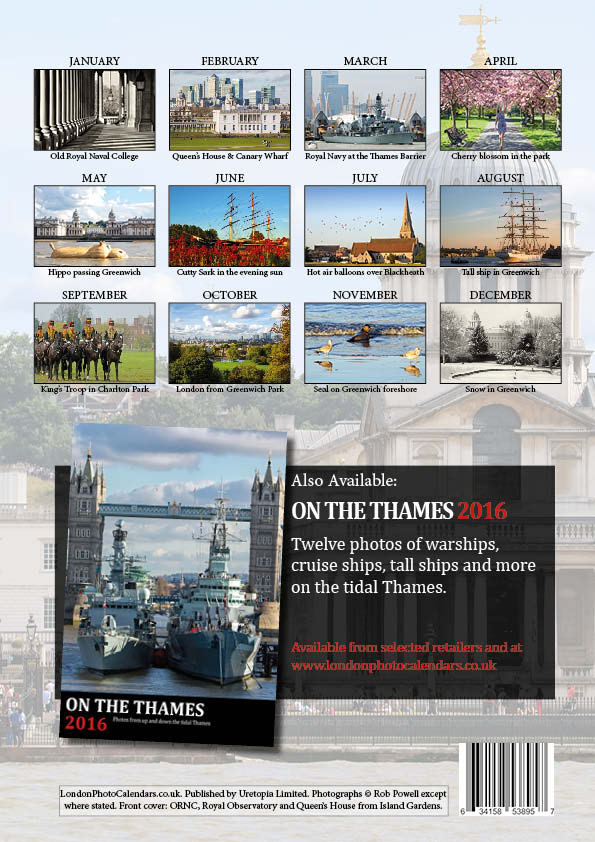 The Royal Naval College was established at Greenwich Hospital in January 1873. While recently perusing through the College archives held at the National Archives at Kew, I found a letter written to the Admiralty in February 1873 suggesting a new coat of arms for the nascent college.

END_OF_DOCUMENT_TOKEN_TO_BE_REPLACED

It was on this day, August 4th, in 1902 that a new way of getting across the Thames, built by the London County Council, opened to the public. The new foot tunnel, which had taken about three years to build, connected Greenwich with Millwall on the other side of the river. The anniversary of the opening provides a good excuse for looking through the newspaper archives for reports from the time. END_OF_DOCUMENT_TOKEN_TO_BE_REPLACED

Here's a great story found, found in an 1851 edition of the West Kent Guardian, of how an 84 year old woman walked from Cornwall to Greenwich to see the Painted Hall but almost wasn't allowed in because she looked too "grotesque".

Mary Callinich arrived at the gate to Greenwich Hospital, having first visited the Great Exhibition, and asked to see the Painted Hall and the Chapel.

The Sergeant guarding the entrance gate, rather unsympathetically, denied the Cornish pensioner entry on the grounds that she had "got such a funny hat". With that, she whipped out a black velvet bonnet and obviously transformed her appearance such that she was promptly allowed in.

She expressed her "highest gratification" as she departed after a two hour visit. Having seen what she came for, one wonders if the formidable Mary Callinich simply walked back to Cornwall afterwards.

Read the full article below:

You can find more interesting newspaper stories from the past in the British Newspaper Archive.

The London Borough of Greenwich was created in the big local government shakeup of 1965, bringing together the Metropolitan boroughs of Greenwich and Woolwich. That change came in to effect fifty years ago today with the new borough using the name of Greenwich but being based in Woolwich.

At the very last meeting of the Metropolitan Borough of Greenwich in the old town hall, councillors unanimously agreed to place on record their "deep appreciation of the loyal and untiring service given to the Borough over the years" by staff members and in the the final motion, moved by Labour's Johanna Gollogly, expressed their "deep regret that the Metropolitan Borough of Greenwich" was to lose its identity on 31st March 1965. END_OF_DOCUMENT_TOKEN_TO_BE_REPLACED