SURFACE-TO-AIR missiles have been set up on Blackheath and the Royal Navy's largest vessel has moored at Greenwich.

The stark images of militarisation will be broadcast around the world as the Navy and RAF prepare for this summer's Olympic games.

Rapier surface-to air-missiles, last used in the Falklands, have been set up on Blackheath - described by Air Vice-Marshall Stuart Atha as a "first class site".

They have been placed on Blackheath this weekend as the RAF continues to finalise plans to position the missiles in six sites in east London. Oxleas Meadow has also been selected as a location for the missile defence systems.

The missiles can offer protection spanning a five mile radius. Any decision to deploy the weapons, in the event of a threat in the airspace, will be taken at a "political level". Personnel operating the equipment will be based at the nearby Army Cadet Centre during London 2012.

The Royal Navy is also preparing for its role in protecting the capital and today brought the largest ship in its fleet, HMS Ocean, to Greenwich for a week of exercises.

The 200 metre long amphibious assault ship, nicknamed as the Mighty O, sailed up the Thames this morning, passing through the Thames Barrier just before eleven. After passing the O2 she was turned around and then pulled towards her mooring at Greenwich Reach.

Lynx helipcopters will be taking part in exercises from HMS Ocean over the weekend and next week exercises will take place on the river.

Greenwich borough residents will have the chance to go on board HMS Ocean on Monday - details available from the council website.

"HMS Ocean's arrival in London on the River Thames today completes the build-up of military assets and personnel taking part in Exercise Olympic Guardian over the coming days which will test the role of the Armed Forces in keeping the Games safe and secure.

"The public will expect that we are ready and prepared in the unlikely event that any threat emerges. That is why Typhoon fast jets are stationed at RAF Northolt, ground-based air defences are being tested at sites across London, and helicopters and Royal Marines will be operating from HMS Ocean, the Royal Navy's largest ship, berthed at Greenwich. The Camp for Climate Action has swooped on Blackheath and and is aiming to stay there until the weekend. Protestors from the group had  kept the location of their camp secret, before it was suddenly announced early this afternoon that they were heading to Greenwich.

They say on their website: "Everyone is welcome to join us, as we converge on the secret location where the camp will rise. This summer, we are swooping together, and together we will transform a part of London into the physical manifestation of our desired worlds".

There had initially been confusion as to where they were heading with news outlets such as the Daily Telegraph and Sky News reporting that camp would be in Greenwich Park.

Since arriving at Blackheath, Climate Campers have begun setting up and posted a series of pictures to their Twitter account, seen below.

Protesters will also be ideally placed to enjoy the Funfair which has also set up at Blackheath and begins tomorrow.

The Orchid Group’s Royal Standard is a bit like the politician of local pubs - it surfs firmly down the middle ground, trying extremely hard to cater for all tastes. And though it’s a smart outfit that creates a general air of comfort and doesn’t charge you extra for its Wisteria free chimneys, all in all it’s just a bit bland.

The Royal Standard is a large, open pub in three distinct areas; the ‘bloke’s’ area at one end has high stools and a big plasma screen, the focal point bar and plenty of standing room sits nicely in the middle, with the more upmarket leather sofas and spider plants rounding things off at the other end. Its size doesn’t let it be cozy, but it does at least allow one to sit down.

The Royal Standard takes no risks with the bar fare or the menu, pushing a very slight ‘Best of British’ angle whilst still offering mediocre Pinot Grigio and bowls of Nachos. The staff are nice and smart, though like many other local pubs a few more smiles and a bit more chat wouldn’t go amiss.

The cries of ‘Yeah’ and ‘Come On’ from the blokes’ corner (Man United were losing at that point) didn’t seem to intrude on all the generally mixed clientele, and there were also a notable number of solo customers making themselves at home with their laptops, newspapers, or simply just a pint. Obviously a good place to go to catch up on your reading.

Since they’ve put in so much effort it would be unfair not to mention the pub’s other extensive offerings: quiz nights, Sunday roasts, advance booking, wifi internet access and fairtrade espresso coffees. Phew. The Royal Standard certainly ticks all the boxes, it’s just that in trying so hard to please everyone it doesn’t seem to really stand for anything. Just like a good politician, really.

Following on from their extremely successful performance last year, the King William Singers*, directed by Hilary Campbell, once again present a mixture of Christmas music, including:

There will even be a couple of singalong carols too!

Tickets: £5 (£3) available on the door. All proceeds to the Albany Charity Fund 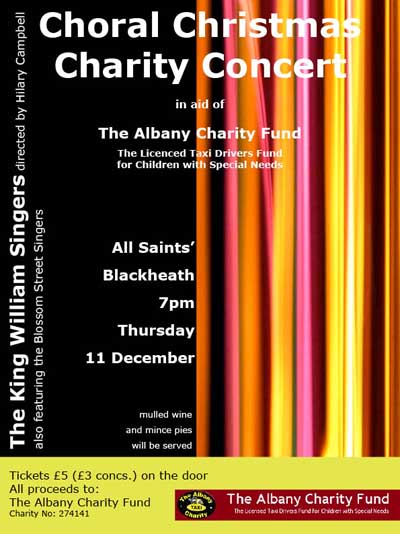 The world famous Moscow State Circus have set up tent at Blackheath common and will be offering visitors a dazzling display of stunts, tricks and spectacle until Sunday 2nd November.