A FLORIST in West Greenwich has shut its doors after ten years.

La Fleur on Royal Hill closed for good on September 1st. The florist-cum-tea shop was this week selling off its catering equipment and emptying the shop.

A notice in the window said:

"We would like to thank our most loyal and wonderful customers who have shared this decade with us - our own extended 'family.'

"We will remember you with fondness and love."

Another local independent business has also announced its impending closure.

A sign has gone up in the window of Stitches & Daughters telling customers that the "lifestyle boutique" is to close this "Autumn/Winter." A sign in the shop window reads:

"It's difficult to run a small independent business under the best of conditions, and the past couple of years have been challenging... the current economic conditions have prompted me to pursue my business ambitions in an alternative direction."

A planning application has been submitted to Greenwich Council for permission to change the shop at 3 Greenwich South Street into an estate agents. 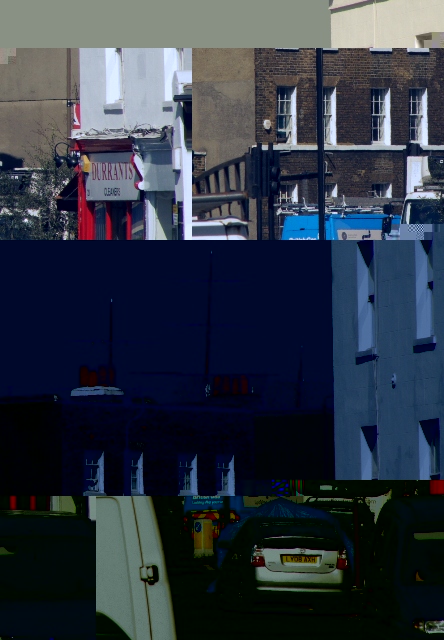 Thanks to Frank for sending me this photo of the Cutty Sark's masts, clearly visible from Greenwich South Street. The tea clipper is now three metres higher than she used to be after the refurbishment raised her up to create a new space below.

HAVE you noticed how many empty shops there are in Greenwich, all of a sudden? In the town centre (excluding Royal Hill) there are 19. The shop that was Warwick Leadlay, at the entrance passage from Nelson Road to the market, is the latest to fall vacant – for the second time in two years.

The only thing in the shop now is a notice in the window from its most recent tenant, Graham and Green, announcing that they have relocated to Notting Hill. That could stand as an epitaph for the folly of Greenwich Hospital’s retail strategy. They elbowed out a business, Warwick Leadlay, that had provided decades of stability on the retail scene, to bring in a trendy outlet that fled back to its comfort zone as soon as it realised that SE10 is not, thank God, Notting Hill.

Around the market, nearly half a dozen shops are vacant. Next to the Post Office, the big Bottoms Up site has been empty for months. The parade at the Greenwich end of South Street now has two vacant shops. The clothing shop in King William Walk has closed. Two of Frank Dowling’s pubs and bars, the old Cricketers (aka the Lani Tiki Lounge) and the Inc Bar above the market arch, are dry. The travel agency near the DLR station has flown away.

Some of it, no doubt, is because of the recession. Some of it is because of Greenwich Hospital’s wish to redevelop the central Market site. It is gradually moving traders out of the bits it wants to demolish, to boost its loathsome scheme to turn the Market into a hotel with a modern shopping precinct attached – unanimously rejected by the council last year, but the subject of an appeal and public inquiry this summer. More on this soon.

Some of it, though, may be because Greenwich shops depend on visitors, and it is simply not an attractive place to visit at the moment. This used to be somewhere that visitors (if not locals) came to shop. But as well as the shops, we have of course lost about three-quarters of our markets. I am increasingly struck by how hugely disappointing the town must now feel for those visitors who can remember it from a few years ago.

The dominant feature of central Greenwich has become a series of hoardings concealing, variously, a mutton-headed tarting-up (the foot tunnel), a national tragedy (the appallingly botched restoration of the Cutty Sark), a vaguely unneccesary “improvement” (the Sammy Ofer wing at the Maritime Museum), an endlessly-delayed project (the pier) or a supposed future university, currently and almost certainly now indefinitely an empty space (the old Village Market site.) And that’s before the Olympics get started…

As the new government starts to wield the axe, the assumption in many quarters seems to be that all public spending is good and that any cuts to it are bad. Much of the time this is, of course, true. But Greenwich increasingly strikes me as a textbook example of just how destructive public spending and official improvement-mania can be. We would have almost certainly have been happier, and our town would have been busier, if they had just forgotten about thir grand plans and left the pier, the foot tunnel, the Cutty Sark, the Maritime Museum, the park and the Village Market alone. I had an exceptional lunch yesterday at Inside, Greenwich South Street. It's hard not to be too enthusiastic about this place: excellent food, really good value for money with its lunch time set menus and friendly customer service. No wonder this is many people's favourite restaurant in Greenwich.

GREENWICH Council has apologised to a café in Greenwich after wrongly listing them as having failed to receive a Food Hygiene Award.

The owners of Baba's Sandwich Bar in Greenwich South Street were shocked to see the listing on the council's published listings, which was also included in a report on Greenwich.co.uk.

Mrs Bolsoy, who started the café 14 years ago with her husband, told Greenwich.co.uk:

"To say that we were furious seeing our business name listed as failed inspection,would be an understatement. I immediately contacted the Environmental Health department, who on investigating, realised there had been an error on their part. We have never failed an inspection in all the years we have been trading. We have a reputation of being very clean, not only with Environmental Health, but with our customers."

Upon being made aware of the error, Greenwich Council told us:

"We would like to apologise to Baba's sandwich bar and their customers for any confusion or distress that may have been caused as a result of an error on our website, which incorrectly listed Baba's as not having a Food Hygiene Award.

It seems that there was an error in updating the information on the website relating to this particular establishment. Regular spot checks are carried out on our website in order to reduce the risk of errors like this taking place, but unfortunately this particular error was not caught by those checks.

Following an internal investigation the error has now been corrected on the website. We have written to Baba's apologising and have also contacted them by telephone."

The Food Hygiene Award is given to catering premises where an Enviornmental Health officer has decided that food is handled and prepared safely. Greenwich Council introduced its Food Safety Award scheme in 2004, with the results of inspections published on its website, and say they were the first borough to do so.

The council say they believe this is an "isolate case" and are reviewing their "procedures to ensure that standards of accuracy are maintained and any improvements identified as a result of this review will be acted on."